You are here:  Attractions -> Things to Do in Northamptonshire -> Lyveden New Bield 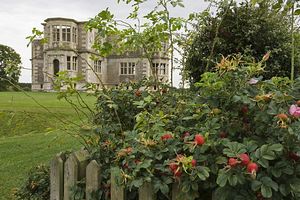 The empty shell of Lyveden New Bield stands like a doll's house awaiting furniture and a family to move into it. After 400 years, that is unlikely to happen, but the family story and evocative building make a moving and interesting historical tale.

Lyveden New Bield was designed and built for Thomas Tresham, who was born into a wealthy family who had owned the nearby Old Bield Manor at Lyveden since 1450, along with a main house at Rushton. Loyal to Queen Elizabeth I, he moved in the highest social circles and was knighted in 1575. However, by 1580 he had converted to the Catholic faith, which was to cost him dear both financially and socially as non-conformists were 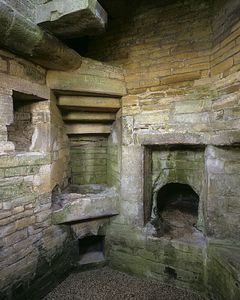 Sir Thomas's considerable income came from the Lyveden estate where he raised and sold livestock, horses and crops. He lavishly entertained, and his plans to build Lyveden New Bield were probably as a lodge and place of entertainment rather than a main home.

His generous social life, heavy fines totaling £8,000 between 1581 and 1605, his imprisonment which hampered his business and his expense keeping his son out of prison created debts from which he never recovered.

The estate, which included the partly-built Lyveden New Bield, passed to his elder son Francis upon his death in 1605. Those knowledgeable about history will recall that Francis Tresham was involved in the Gunpowder Plot and he died in December 1605 in the Tower of London.

The estate then passed to Sir Thomas's younger son, Lewis, whose rapid rise in social rank was matched only by his speedy descent into debt, leaving Lyveden New Bield unfinished, much as it remains today. The estate was sold in 1643 and Lyveden New Bield was never completed or lived in. It was handed over to The National Trust in 1922.

Lyveden New Bield was a symbolic representation of Sir Thomas Tresham's deep religious faith. Built in the form of a Greek cross, it emulates St Peter's in Rome. Inscriptions and mottoes around the roofline declare words 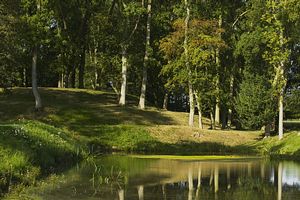 of faith such as "Gaude Mater Maria" which means "Rejoice Mother Mary" and the Christian lettering "IHS".

Religious numbers were used in the design - the windows were five feet high, with five faces and bays starting five feet from each corner of the building. (The number five commonly represents Jesus). Three shields divide the three basement windows, symbolizing the Holy Trinity, and so on.

Visitors can enter the elaborate ruin through a servant's door and walk through the planned rooms which exist without floors, ceilings, windows or a roof.

The New Bield was planned with a moated garden, terraces and spiral prospect mounds, footings of which can still be seen around the ruined Elizabethan lodge. It is thought to be the oldest pleasure garden layout in the country and is now planted with an orchard of old varieties of apple, pear, cherry and plum trees.

Plans and letters written by Sir Thomas from prison were hidden in the Tresham family home at Rushton Hall as they gave telling evidence about Francis's treasonous plots. They were discovered in 1832 and gave vital details and insight into the original design for Lyveden New Bield, including the plants for the gardens.

Days Out near Lyveden New Bield