You are here:  Towns -> Places to Visit in Bedfordshire -> Woburn

Things to do in Woburn, Bedfordshire 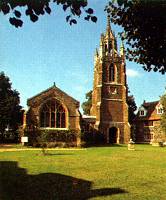 Woburn is surrounded by wooded countryside and parkland with the Greensand Ridge running through the north western part of the parish. The town takes its name from its Saxon settlers - Wo meaning twisted or crooked - Burn meaning a stream. Although a Saxon settlement it was the Norman's who made the greatest impact on the town when in 1145, Hugh de Bolebec founded the abbey, which has remained a major influence on the town ever since.

The quality and variety of the buildings give Woburn its character, ranging from the 17th century to the present day. Many buildings are listed as of special architectural or historical interest. The houses and individual shops that edge the main street are mainly in the Georgian style.

Standing in Park Road at the entrance to Woburn Park, is the Church of St Mary, built in 1865-8 by Henry Clutton for the 8th Duke of Bedford. The Church has a very bold interior vaulted throughout in stone with stained glass windows. Of note is the one dedicated to the memory of

Mary, wife of the eleventh Duke and known as the Flying Duchess, and that depicting St. Francis of Assisi featuring some 50-60 birds.

In the centre of the town is the former Town Hall , now an antiques centre. It was built by Blore, who also designed the original east front of Buckingham Palace. Set back from the main road is the old parish church which was reduced to use in 1868 as a Mortuary Chapel. The chapel is now the Woburn Heritage centre and has exhibits about the town, Abbey and local history.

Set six yards away from the chapel is the tower. The stump is believed to be from the original medieval church of Woburn. The tower houses a beautiful clock made by Benjamin Louis Vulliamy, given by the 6th Duke of Bedford in 1830 and is still in working order. The Woburn estate is home to Woburn Safari Park and Woburn Abbey, home of the Russell family, the Dukes of Bedford for over 450 years. The Abbey and Safari Park are open to the public.

more self catering near Woburn...

Days Out in Woburn

Places to Visit near Woburn