You are here:  Attractions -> Things to Do in Gloucestershire -> Westbury Court Garden

Westbury Court Garden offers a little touch of the Netherlands in the heart of Gloucestershire. These formal water gardens complete with their long canals and elegant Dutch pavilion were laid out over nine years from 1696. Today they are the only 17th century Dutch water garden in the country.

A visit to these historic gardens allows visitors to step back to the 1720s. After William of Orange came to the throne in 1689, all things Dutch became very fashionable. The Dutch Canal Gardens were laid out in a formal continental style, dominated by straight lines, long canals and clipped yew hedges. 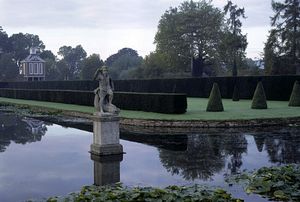 for centuries. Although many contemporary gardens were re-fashioned by Capability Brown in the 19th century in a far less formal style, Westbury Court seemed to escape modernization, going unnoticed in a changing world of horticulture.

Eventually the house was demolished and by 1967 the gardens were in a state of neglect. They were handed over to The National Trust, which has restored them beautifully to their former 1720's glory.

A 1705 engraving of the garden by Kip and old account books were used to gather information about the exact plantings and design in order to authentically recreate this rare Dutch water garden with its simple green spaces. It is now the best surviving example in England.

The Holm oak in the gardens is thought to be the oldest in Britain and the huge tulip trees put on a splendid show of colour in the summer.

An elegant two-storey Dutch pavilion heads the main canal which is bordered by formal clipped yews. Further along, a T-shaped pond 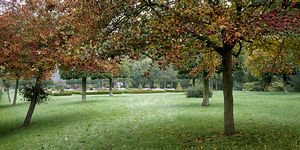 is overlooked by a statue of Neptune and is home to some large ornamental koi carp. Set on the banks of the River Severn, like Holland itself, the garden is threatened from time to time by rising water levels.

The formal parterre flower beds make a three-dimensional display of colourful blooms and the established topiary make this a fascinating garden to stroll and discover. Another treasure for visitors to seek out is the hidden walled garden where fruit trees are trained along the warm brick walls.

In spring the gardens are full of superb early-flowering bulbs followed by the blossom of the many fruit trees. In summer, the rose garden is a picture, underplanted with bright tulips and carnation pinks. Showy waterlilies and other waterplants grace the canals.

The orchard is planted with historic varieties of pears, apples and plums, all dating back to the garden's original era. The produce is sold in the National Trust shop in the harvest season but unfortunately there is no tearoom at present.

Days Out near Westbury Court Garden