You are here:  Towns -> Places to Visit in Bedfordshire -> Moggerhanger

A hill top village dominated by the Church of St. John The Evangelist, which was built in 1860-61, of French influence. The Church has a chancel tower with a pyramid roof and high apse adjoining.

Moggerhanger Park is a Grade 1 listed building and was originally a small mid 18th century sporting lodge. The architect Sir John Soane transformed it into a substantial house between 1791- 1812 for Godfrey Thornton and his son, both directors of the Bank of England.

Around World War 1 the house was adapted becoming the Bedfordshire County Sanatorium. It remained a hospital until 1987, and is now the property of a Preservation Trust. Humphry Repton designed the gardens and the parkland; these and the House are now all part of a programme to restore the estate to their former glory. 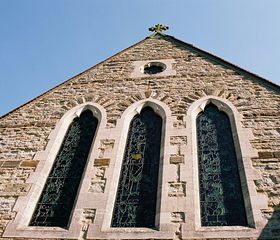 more self catering near Moggerhanger...

Days Out in Moggerhanger

Places to Visit near Moggerhanger