You are here:  Counties -> Things to do in Fife 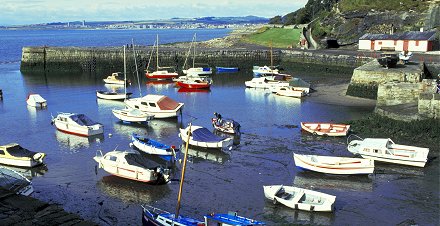 The ancient Kingdom of Fife has always been at the heart of Scottish history and still cherishes its wealth of castles, palaces, cathedrals and gardens today. A relaxing atmosphere prevails throughout Fife making it an ideal setting for a short break - or indeed a longer stay - on Scotland's sunny east coast.

Dunfermline was the capital of Scotland from

11th century to the union of crowns in 1603. Consequently, Dunfermline boasts a Royal palace, a 12th century abbey and a restored 15th century Abbot House. The abbey is the final resting place of King Robert the Bruce and is the post-Iona burial site of the Kings and Queens of Scotland. The Fife Tourist Information Centre for the area is in the High Street.

Close by is the Royal Burgh of Culross, with its picturesque 17th century cottages. Here you can stroll through the cobbled streets that skirt the shoreline of the Firth of Fourth. Culross, once an important religious centre, was the birthplace of St Mungo, Patron Saint of Glasgow.

Charlestown lies further along the coast. This is an attractive model village built in the shape of the letter E to honour its creator, the 5th Earl of Elgin. Limekilns neighbours

Charlestown and is the ancient port of the Benedictine monks of Dunfermline. Following the Fife Coastal Path east from the magnificence of the Forth Bridges, you will arrive at Aberdour with its fine castle.

Kirkcaldy is one of Scotland's most ancient burghs and its history stretches back to the 11th century. An industrial centre in the 19th century, Kirkcaldy was the first town to use the power loom, which revolutionised the weaving industry. In later years it became "the world's linoleum capital"!

Today, the area's industrial heritage has largely disappeared, replaced by bustling towns with family attractions such as the Kirkcaldy Museum and Art Gallery. Glenrothes is a new town, with some of the finest leisure facilities available.

The popular holiday town of Leven has an impressive swimming pool and leisure complex to complement its traditional sandy beach. Families will enjoy

the busy promenade and the nature trails in Letham Glen and Silverburn Park.

The coastline is scattered with picturesque towns and villages, each with its own history, usually based around its harbour. Most are still busy with fishing boats. Burntisland is an attractive seaside holiday town with a lovely beach and many attractions. Kinghorn is another. Nestling below cliffs it makes a scenic setting for a variety of water sports.

Dysart and the villages of East and West Wemyss are steeped in character, with crow-stepped gable buildings fronting quaint streets. The Wemyss Caves on this stretch of coastline are treasure troves of Pictish and Viking carvings.

East Neuk of Fife
The East Neuk of Fife is a delightful area boasting unique maritime heritage.Anstruther and Crail are just two of the picturesque fishing villages to discover here.

Anstruther's Scottish Fisheries Museum tells the story of fishing in the area and beyond. You will find attractive shoreline walks throughout the area, along with ancient castles and museums, country parks and nature trails, water sports and sea-angling.

St. Andrews is the seat of the Royal and Ancient Golf Club. It's a picturesque Royal Burgh, where you you will find the British Golf Museum in the town's Bruce Embankment, which tells the story of golf through the ages. At the Cathedral, you can climb St Rule's Tower for magnificent views of the town and its surroundings.

North Fife, Cupar and the Howe
Lining the shores of the Firth of Tay, the towns and villages of the north coast of Fife provide an excellent base from which to explore the region. The coast road winds west to the town of Newburgh. There's an important 12th century abbey here which overlooks the salmon-fishing waters of the River Tay. To the east, the town of Leuchars is the site of a fine example of Norman architecture - the 12th century Church of St Athernase.

The Lomond Hills provide opportunities for walking, with spectacular vistas. The valley of the River Eden, known as the Howe of Fife, is scattered with small, pretty villages, such as Ceres. Ceres is home to the oldest highland games in the world. The old county town of Cupar was the original seat of justice and government for the whole of Fife.

Two miles south is the Hill of Tarvit, a glorious mansion house now in the hands of the National Trust for Scotland. Nestling in superb gardens, the Royal Palace of Falkland, was once the country residence of the Stewart kings. It was built between 1501 and 1541 by James V and has some of the most exceptional architecture of its time in Britain.

Days out in Fife


Places to Visit in Fife