You are here:  Attractions -> Things to Do in Fife -> St. Andrews Preservation Trust Museum & Garden 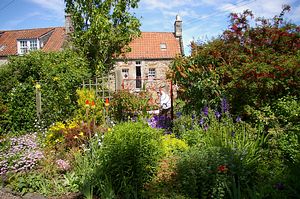 Although there has been a house on this site since at least 1140, the present building is probably 16th century. It was originally built for one family, but was later divided up to create houses for fisher families.

In 1937 the building was saved from demolition by a local architect, James Scott, who reconstructed it using materials salvaged from other condemned houses. On the ground floor, for example, you can see a marriage lintel used as a mantelpiece, and a doorway made from the frame of a box-bed.

The building was purchased by the St Andrews Preservation Trust in 1962. The Trust is a charitable organisation which aims to preserve the history and character of St Andrews.

Our displays on this floor depict a variety of old shops and businesses in St Andrews including Aikman & Terras, a grocer's which operated in the town from 1837 until 1981. Our display shows the shop as it would have been in the early 1950s, just as rationing was coming to an end - a fascinating insight into the days before the supermarket.

Our Chemist shop display contains many interesting items from the 19th and early 20th century, many of which came from Keith's the Chemist, once situated at 73 South Street St Andrews. These include two large glass carboys - used to identify the shop from the outside - and a variety of implements and receptacles from the days before the National Health Service when the majority of pills and medicines were made on the premises.

The display of dental equipment dates from the mid 19th century. Many of these tools belonged to local jeweller-turned-dentist David Duncan and his descendants and illustrate the happy progress that has been made since the early days of dentistry. Also on the ground floor is the Museum Shop.

On the staircase and first floor landing can be seen exhibitions relating to various aspects of the history of St Andrews and its people. These change regularly throughout the year so there is always something new to see. Also on the first floor landing is the Museum Juniors area, providing fun worksheets and books for children aged 5-12. New worksheets and children's competitions are produced in conjunction with each exhibition.

The exhibition for Summer 2010 is 'Step into the Roaring Twenties: Discover St Andrews in the 1920s.'

The Museum also takes part in local events including the annual St Anza poetry festival and the Preservation Trust's popular 'Hidden Gardens of St Andrews'. Other exhibitions have featured the work of local artists and craftspeople and students at the university.

Our lovely secluded garden has acquired a reputation as one of the most beautiful and tranquil sites in St Andrews. Situated behind the Museum and sheltered from both noise and sea breezes by its fine old 16th century walls, the garden is home to many beautiful plants and shrubs and has won a number of prizes over the years. On summer days it provides an ideal place to relax and enjoy the sunshine. Truly a hidden gem!