You are here:  Attractions -> Things to Do in North Yorkshire -> York Minster 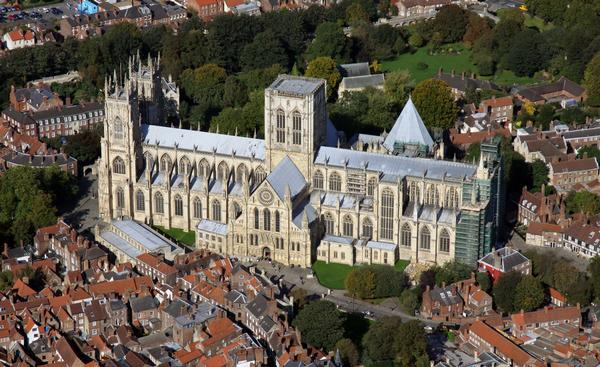 © Shutterstock / Neil Mitchell
If you're visiting York, you can't miss the enormous cathedral at the heart of the city - York Minster - the largest Gothic Cathedral in Northern Europe.

York Minster is 518ft long, 241ft wide, and the tower is 197ft high - it's the biggest lantern tower in Britain. The architecture is of the Perpendicular, Decorated and Early English styles. 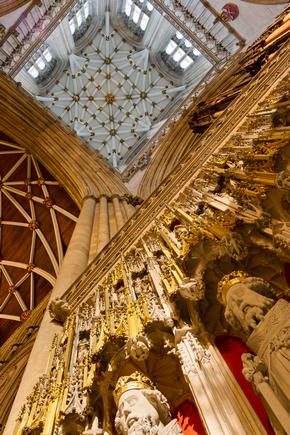 Central Tower and entrance to The Quire © Shutterstock / Phil MacD Photography
According to Bede, this site was first occupied by a small wooden chapel in 627 A.D. - and it was the site of the baptism of Edwin, King of Northumbria.

It was Oswald (Edwin's successor) who dedicated the chapel to St. Peter (as the Minster still is today) and enclosed it in stone.

Both the Saxons and Normans built churches here, which were destroyed by invading Danes, Norse raiders and by fire.

Restored, sections rebuilt and extended, succeeding generations of Christians have striven to ensure the survival of the Minster in York.

In 1220 a 250-year programme to rebuild the Minster around its Norman predecessor began.

It was Archbishop William de Grey who was responsible for the design of the transept where the new building work began.

What evolved was the Cathedral much as we know it today. 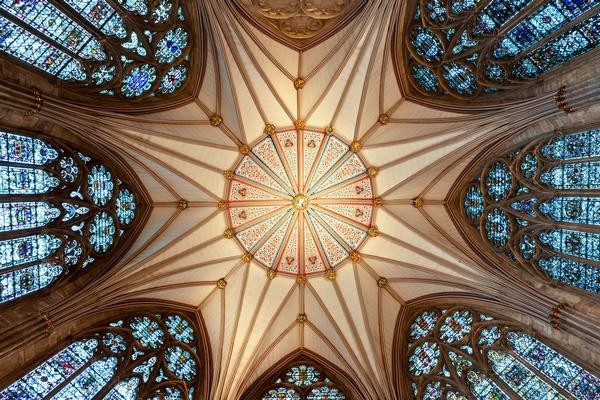 Chapter House Ceiling © Shutterstock / Phil MacD Photography
Over the centuries much work has been necessary to maintain the fabric of the Church and the good work has continued in this century.

After the Second World War, the glass from the medieval windows which had been removed for safekeeping, was restored to its rightful place. This must have been like solving a giant jigsaw puzzle.

Major restoration was carried out between 1967-1972 to restore the central tower and again in 1984 when fire destroyed the roof of the south transept. 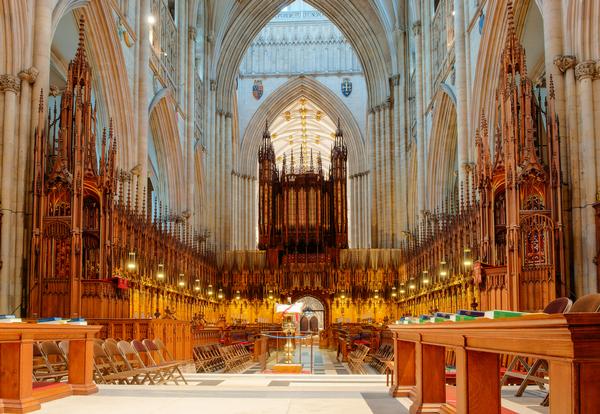 Choir Area © Shutterstock / Radek Sturgolewski
During the restoration, a decision was taken not to replicate the original carving of foliage on the sixty-two bosses which had been destroyed.

Children submitted thousands of designs and six were chosen to be included in the new carvings, which represent all aspects of God's creation.

Undoubtedly the most glorious feature of the Minster is its wealth of stained glass - one hundred and twenty eight windows in total. 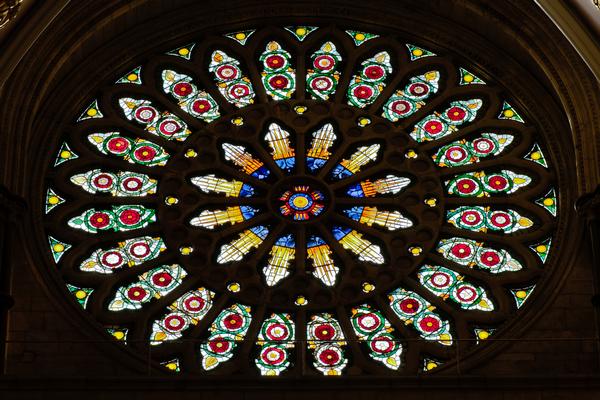 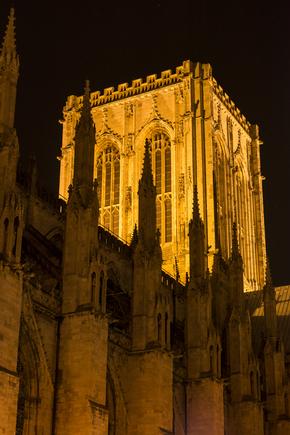 Central Tower © Shutterstock / Nando Machado
The awe-inspiring fifteenth century east window is the world's largest area of medieval stained glass; it depicts the beginning and the end of the world.

Other famous windows are the West window with its heart-shaped tracery portraying the heart of Yorkshire.

In the South transept is the Rose window commemorating the end of The Wars of The Roses.

Another of importance is the Pilgrim window, featuring Peter surrounded by pilgrims, unusual details to look for are the funeral of a monkey and a cock reading.

You will find many other fascinating features on your tour of the Minster; look out for the dragon's head in the nave projecting from the gallery; this is part of a levering device to raise the cover on the font. 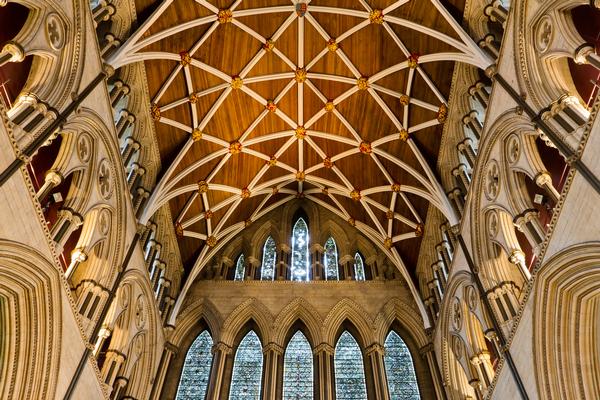 The rood screen, a masterpiece of late gothic sculpture is worth seeing, as is the monument to Archbishop William de Grey in the South transept.

Before leaving York Minster don't miss The Crypt, where you can see the Romanesque pillars from the eleventh century church, and many treasures of antiquity, also The Undercroft, which is now fitted out as a museum. 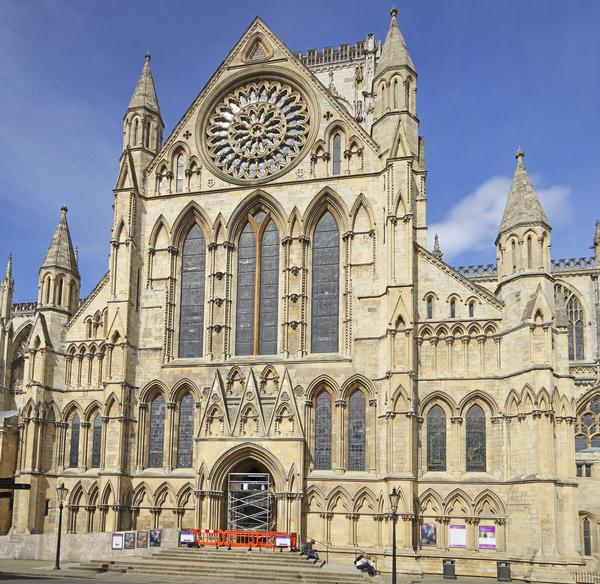 Entrance © Shutterstock / Alastair Wallace
Do allow time to visit the unique thirteenth century, octagonal Chapter House, since as it is buttressed on the eight sides, no central pillar is required to support its star-ribbed painted roof and light pours in through the seven window walls, showing up the fine carvings.

York Minster offers visitors a range of tours, including Stoneyard Tours, Tours of the Glass Conservation Studio, Hidden Minster Tours and Library Tours throughout the summer. To find out more or to book a tour, please call 0844 939 0016 or email. 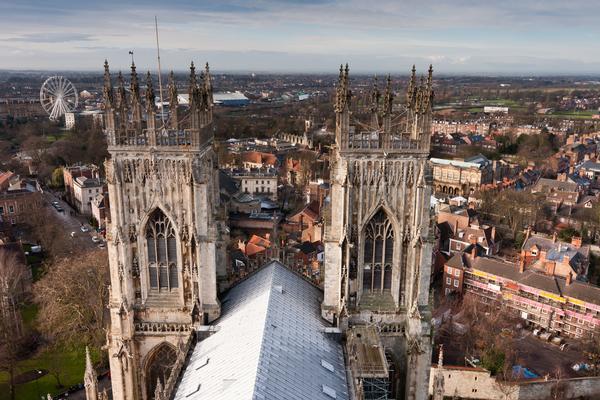 View from the Central Tower © Shutterstock / Phil MacD Photography
It is also possible to book a visit for your school.  Please contact The Centre for School Visits on 0844 939 0017 or email.

For general information, or to find out what concerts, events and exhibitions are on at York Minster, please visit the York Minster website.

Days Out near York Minster

Places to Visit near York Minster