You are here:  Attractions -> Things to Do in Wiltshire -> Westwood Manor 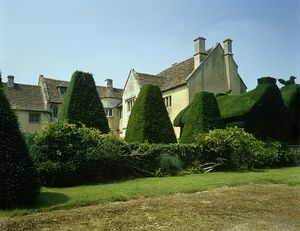 
Westwood Manor is a particularly delightful day out for those interested in Gothic and Jacobean architecture, early musical instruments and English Civil War armour.

Although quite small by many standards, Westwood Manor is packed full of character and interesting features.

The 15th century manor house was built by a Wiltshire farmer out of local stone.

It is an L-shaped building with a conical corner tower, overlooking a grassy courtyard which is crossed with flagged paths.

It was bought in the 16th century by Thomas Horton, a local cloth merchant, who upgraded it to better suit his status.

During the 17th century the fine plasterwork was added along with much of the panelling which still survives. During the 18th century 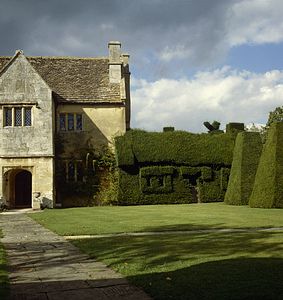 and 19th century Westwood Manor was once again used as a farm, albeit with some fine embellishments.

The final owner was Mr. Graham Lister who died in a motoring accident in 1953. He left the house and contents to The National Trust and the house is now administered by a tenant on their behalf.

The house is a mix of down-to-earth farmhouse and upper class family home. The Corner bedroom is a case in point, with plain whitewashed walls, a fabulously ornate ceiling and a modest four-poster bed. However few people have managed a peaceful night's sleep, as the room is said to be haunted by the mysterious figure of a woman.

The old house is also said to have been cursed by a gypsy's wife after the owner, a local magistrate, sentenced the gypsy for poaching. One misfortune after another befell the family until they were forced to leave.

Mysterious fires and violent deaths fill the house's long history. One occupant drowned, another hanged himself and another jumped to his death from a second floor window.

Despite its humble origins, Westwood Manor was known to have been a favourite place for Queen Mary to visit. It is said the family took to hiding favourite things as the Queen had a habit of taking 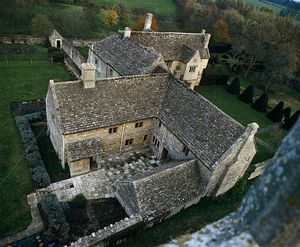 a liking to various objects, forcing the family to give them to her as a gift. Her pen, which she used while staying at the manor, is on display in the grand hall beneath her picture.

As previously mentioned, the oriel windows are fine examples of late Gothic and Jacobean architecture. The deeply recessed ceilings and plasterwork also date back to the Jacobean period.

The period rooms all contain antique furniture along with collections of armour, tapestries and early keyboard instruments.

The oldest Italian keyboard in England is on display within the house and is still in good working order. Musical recordings of the virginal and spinet can also be heard as part of the visit.

One of the most unusual rooms to see is the parlour above the grand hall. It has small interior porches and an intricate plaster ceiling. From the low window the room has lovely views of the local village church and the Frome Valley beyond.

Other features of the manor include the impressive Tudor stone fireplaces and the heavily ribbed doors. Outside there is a fine medieval barn and a small Tudor garden with topiary yew trees and Italian sculptures around a simple pond.

Westwood Manor has its own free parking but there are no other facilities on site.

Days Out near Westwood Manor

Places to Visit near Westwood Manor