You are here:  Attractions -> Things to Do in South Wales -> Tintern Abbey 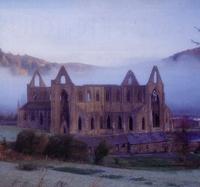 It's easy to understand why Tintern Abbey was one of the first places in Wales to attract Visitors.

Travellers have been flocking to this riverbank in the wooded Wye Valley for hundreds of years to admire Tintern's grace and sublime beauty.

The appeal of this exceptional religious house remains as enduring as ever, the best preserved medieval abbey in Wales.

Founded for Cistercian monks in 1131, Tintern was largely rebuilt in the late 13th Century by the lord of nearby Chepstow Castle, Roger Bigod.

It encompasses grand design and architectural detail of great finesse.

The shell of the abbey stands open to the skies almost to its full height, an outstanding example of the elaborate "decorated" style of Gothic architecture.

Visitors are invariably captivated by the enormous windows with their delicate tracery, and the wealth of decorated detail on show in the doorways, walls, and soaring archways.

This extensive site also gives a fascinating insight into the monastic way of life in medieval times. Tintern stirs the soul.

Wordsworth was inspired by his visit to write his famous poem, "Composed a few Miles above Tintern Abbey".

Tintern's true character though, can perhaps never be captured in words.

As the Cistercian Father, Bernard of Clairvaux wrote, "You will find among the woods something you never found in books."

Days Out near Tintern Abbey

Places to Visit near Tintern Abbey