You are here:  Attractions -> Things to Do in South Wales -> Chepstow Castle 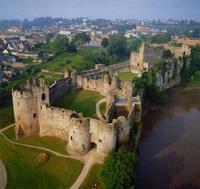 Chepstow Castle is the oldest surviving stone castle in the UK, which makes it a pretty special castle to visit. The opportunity to see and touch something built almost 1000 years ago is pretty remarkable.

Built in 1067, Chepstow Castle has outlasted many other newer castles, still retaining its massive gatehouse flanked by two round towers. Inside the high walls there are excellent exhibits which cover the castle’s interesting place in English history.

Chepstow Castle was built with defence in mind, right on the edge of a steep cliff above the scenic River Wye.

It was intended to defend the border crossing between England and South Wales as part of the iron-ring of castles running along the troublesome border.

Chepstow Castle was built in 1067, just a year after William I took the English throne and began his extensive castle-building project to control any possible uprisings. Although most 11th century castles were built of timber, Chepstow Castle’s Great Hall and Keep were built of stone.

It was built by Norman Lord, William Fitz Osbern, who became Earl of Hereford. Unfortunately his son Roger was not as loyal to the king as his father and eventually lost control of the castle.

From 1067 to 1690, Chepstow Castle was a work in progress, adding and changing its defences to adapt to the latest thinking in military architecture.

In 1200, local hero William Marshall added a bailey with round towers and in the 1300s his successors added gatehouses, barbicans and art walls.

Inevitably the castle complex grew larger and stretched further along the top of the ridge.

Roger Bigod III added more accommodation and the D-Tower which can still be seen in the southwest corner of the castle walls.

Stonemason Master Ralf built the 13th century hall and kitchen block. Mediaeval battlements which suited archers became musket-friendly parapets as times changed after the Civil War sieges of the castle, when it was a Royalist stronghold.

In later times the castle was also used as a prison. It continued to be used for defence until 1690 when the garrison and guns were removed and the structure began to fall into disrepair.

The state eventually took control in 1953, and since 1984 it has been managed by Cadw, the Historic Environment Service of the Welsh Government.

What to see at Chepstow Castle

Visitors will find plenty to keep them busy at this historic monument. Explore Martens Tower and the Earl’s Chamber, walk along the battlements and admire the view down to the swirling Wye River far below.

As well as having the oldest Great Hall in British castle history, Chepstow also has the oldest wooden castle doors. Once hung in the arched entrance of the gatehouse, they are now more properly cared for as part of the on-site exhibition.

Once your visit to Chepstow Castle is over, explore the beautiful Wye Valley or visit another neighbouring attraction, the ruined shell of Tintern Abbey.

Days Out near Chepstow Castle

Places to Visit near Chepstow Castle