You are here:  Attractions -> Things to Do in Ceredigion -> Strata Florida Abbey 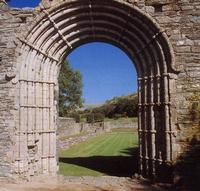 The austere Cistercian monks were renowned for seeking out wild and lonely places in which to practice their religion. None of their Welsh abbeys preserve that spirit of remoteness more strongly than serene Strata Florida, the "Vale of Flowers", deep in the hills north of Tregaron. There is much to captivate the visitor at this evocative, historically important site.

The abbey, founded in the 12th century, grew to become not just an important religious house but an influential centre of Welsh culture (the "Westminster Abbey of Wales", no less) patronised by princes and poets.

Although in ruin, Strata Florida displays much intriguing evidence of its former status. The plan of the church can still be clearly traced, and within the south transept there is a fine collection of medieval floor tiles. Many Welsh princes are believed to have been buried here, and a plaque commemorates the greatest medieval Welsh poet, Dafydd ap Gwilym.

Days Out near Strata Florida Abbey