You are here:  Attractions -> Things to Do in East Sussex -> Sheffield Park and Garden 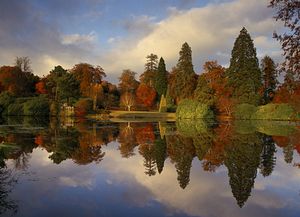 Sheffield Park may be one National Trust property that cricket lovers will really want to visit. It was the site of the first England v. Australia cricket match in 1884 on a cricket pitch previously laid out by the 3rd Earl of Sheffield. Lord Sheffield's team included the legendary W.G. Grace. In case you were wondering, Australia won by an innings and six runs!

Mentioned in the Domesday Book, Sheffield Park is actually in East Sussex. Thomas Howard, the 3rd Duke of Norfolk is known to have entertained Henry VIII here.

The current neo-Gothic Sheffield Park House, which is still privately owned, was designed by James Wyatt in 1775 and can be seen rising above the gardens like 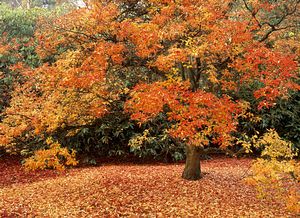 a fairytale castle with its fine tracery window overlooking the park.

It is hard to know which season is the most colourful in Sheffield Park. The superb gardens were laid out by Capability Brown in the 18th century. Gravel paths lead around the extensive gardens with their beautiful flowering shrubs.

Capability Brown's original five lakes are still the centerpiece of the gardens with picturesque waterfalls cascading down and offering a pleasant sight and a refreshing sound to the rhododendron gardens nearby. During the summer the still reflections are dotted with water lilies. The Queen's Walk around one of the lower lakes is now a natural conservation area for wild flowers.

His work was slightly adapted by Humphrey Repton around 1790. By 1796, when the estate was sold to John Holroyd, Baron of Sheffield, Sheffield Park was noted for its wonderful plantings of trees.

The gardens were further developed with large scale plantings by the owner Arthur G. Soames in the early 20th century. His love of New England fall colours led him to plant acers, ironwoods, black 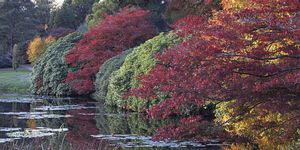 tupelos and sweet gums known for their red, orange, gold and bright yellow autumnal colours. Special autumn garden tours are offered by experienced garden stewards to see this brilliant show each year in October and November.

During World War 2 the grounds looked totally different. They were used as the headquarters for the Canadian armoured division and Nissen huts were spread throughout the woods and gardens.

Eventually the gardens were split up and sold off in various lots. The National Trust purchased an initial 40 hectares of the gardens, and it now owns 80 hectares including the National Collection of Ghent azaleas which are a showpiece in the spring, along with the daffodils and bluebells.

The Grade 1 listed parkland is a valuable asset both for wildlife and for visitors to enjoy. Winter walks through the park offer stunning views of the surrounding area. The magnificently mature trees continue to offer colour and texture all year round.

Although the house is not open to the public, there is a catering buggy which supplies drinks and snacks, and a National Trust Gift Shop onsite.

Days Out near Sheffield Park and Garden

Places to Visit near Sheffield Park and Garden