You are here:  Attractions -> Things to Do in North Yorkshire -> Mount Grace Priory 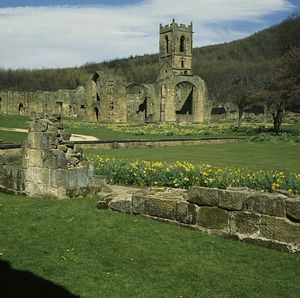 Although Mount Grace Priory is just a short drive from the grand ruins of the Cistercian Fountains Abbey, it depicts the contrasting simplicity and austerity of life at this well-preserved former priory of the Carthusian Order of monks.

Mount Grace was founded in 1398 by Thomas de Holland, the Earl of Kent, and was one of only nine such charterhouses which were ever established. Set against the wooded Cleveland hills it is still a place of quiet contemplation and peace.

The Carthusians were hermits as well as monks, living a very isolated existence even from each other within the monastic walls. They abided by a vow of silence at all times and although it was a harsh existence, there was a waiting list of applicants!

Visitors can stroll around the central grassy cloister which ran for 82 metres (270 feet) along its longest side. Arranged around it are the remains of the cells where the prior and 23 monks spent their lives in prayer, meditation or copying out devotional works with illuminated text. Lay brothers did the menial work around the community.

One of the cells has been reconstructed and furnished to show how the space would have been used with the upper room being the workshop area and a study and a bedroom on the ground floor.

The four-room cells have retained the small hatch through which meals would be served from the cloister. The awkward right-angle bend ensured that the monk and server did not even have eye-contact. Arched recesses in the cloister walls would have been where taps were located which would have supplied water from the spring.

Their self-imposed prison-like conditions of solitary confinement allowed each monk his own walled garden with a garderobe or primitive toilet at the far end. The diverted spring would have been channeled past these privvies and the remains of this primitive plumbing still project through the garden walls on the north side.

Some of the best preserved remains are parts of the small church with its battlemented tower. It would have been used for communal worship on Sundays and rare religious feast days.

Like most monastic communities, the priory was dissolved in 1539 under Henry VIII's act and the site lay unused for almost a century before the original 14th century guest hall was converted into a long manor house by Thomas Lascelles in 1654. He added the two-storey porch which can still be seen above the doorway.

The site now has some well laid-out gardens which are a haven for wildlife. Geese, ducks and stoats are likely to be seen going about their business beneath the trees in this grassy area. The original Guest Hall now provides an interesting exhibition centre about the way of life which was part of the Carthusian Chapterhouse.

Mount Grace is an ideal place to visit as part of a gentle two-mile walk from the nearby village of Osmotherly. Start and finish with lunch or refreshments at one of the three local pubs in the village which are all noted for their good food and local ales.

Days Out near Mount Grace Priory