You are here:  Attractions -> Things to Do in Gloucestershire -> Chedworth Roman Villa 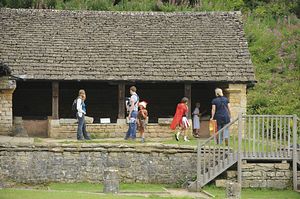 If you want to visit the National Trust's oldest stately home, the Chedworth Roman Villa is the site to visit! The remains of this 4th century Roman villa can be found close to Fossebridge in Gloucestershire in a lovely natural setting.

Like many historic treasures, the villa was discovered by accident by a gamekeeper who was ferreting in a wooded valley in the Cotswolds. He certainly found more than he expected. Chedworth Villa is one of the largest Roman Villas ever discovered in Britain.

Once excavated, the area showed over a mile of surviving walls with some fine mosaics, commonly used as decorative flooring in notable Roman villas. Walkways allow visitors access to the mosaics without damaging the tiny coloured 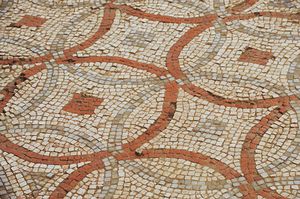 tiles. The Roman Mosaics at Chedworth show mythical figures depicting Winter, clutching a dead hare, and Spring, depicted by a sprightly figure dancing with a bird in her hand.

There are the remains of two Roman Bath houses; a hot sauna-like sweating chamber with a hypocaust which would be followed by the cold plunge bath, made to make the skin tingle. The natural spring which supplied the Roman Villa some 1700 years ago still feeds the water shrine.

The villa was way ahead of its time and even had a latrine which was an early toilet seat placed over a sewer, complete with fresh running water.

Visitors may see some descendants of early Chedworth Roman Villa residents - the large snails. These were introduced by the Romans who fattened them up on milk then cooked then as a delicacy.

The former owner of the land on which the villa was discovered was Lord Eldon. He built the picturesque building which now houses the small museum of recovered objects which includes 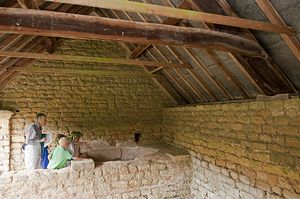 a child's coffin. An informative audio-video film can be seen as part of your visit. The site has been administered by The National Trust since 1924.

Chedworth is the summer residence of some rare Lesser Horseshoe Bats, a species which have suffered serious decline in their numbers in recent years. The National Trust's Head of Nature Conservation continues to ensure that the building can support this colony of bats.

Caves, mines and roofs of larger houses are the preferred home of the Lesser Horseshoe bats, which can live up to 21 years. At Chedworth, a bat flap at the Visitor Centre allows these tiny bats, with bodies just the size of a plum, to go hunting for food at dusk. Look for the bat droppings around the North Bath House.

Like all National Trust shops, the Gift Shop at Chedworth Roman Villa is very theme orientated. It has a wide range of Roman themed gifts, books and plants. The shop and tea tent also offer light snacks and drinks for thirsty amateur archaeologists.

Days Out near Chedworth Roman Villa