You are here:  Attractions -> Things to Do in Gloucestershire -> Lodge Park and Sherborne Estate 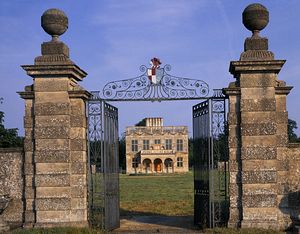 Gloucestershire is well known for its fine Regency architecture and gracious spa towns, and Lodge Park was built in keeping with this affluent lifestyle.

Lodge Park was built on the Sherborne Estate for John "Crump" Dutton in 1634 to meet his passion for entertaining, gambling and banqueting in a sporting landscape. He was known as a wily Civil War politician with a hunchback.

The impressive hunting lodge was designed as an 18th century grandstand rather than a home, surrounded by acres of deer park. It was purpose-built as an observation post for deer coursing and for lavish entertainment. 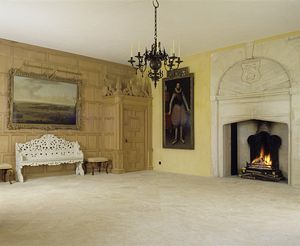 The National Trust in 1983. It became one of the first buildings which the Trust restored by relying totally on archaeological evidence to reinstate its original features.

The grandstand was originally built as a Jacobean hunting lodge with a wonderfully excessive ornate facade which is crammed with Italianate features. The heavy columned portico is topped by an oversized balcony which was used for spotting local game. The windows are crowned with ornate pediments and the roofline is finished with an enormous columned chimneystack.

The lodge was situated to command sweeping views down the estate to the river valley below. The grassy track was edged with drystone walls which run for over a mile (1.6km) from the main gateway. The main sport would be betting on the dogs which chased the fallow deer up this enclosed course, which finished at the shallow ditch in front of the house.

The interior of the lodge has just two large rooms, one on each floor, with a basement kitchen below. The grand staircase would sweep excited guests up to the Great Room which led out to the balcony or up to the viewing platform on the roof to watch the hunt in progress.

Initially the house was surrounded by a deer park which 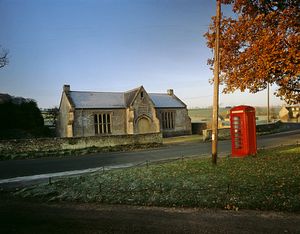 was later landscaped by Charles Bridgeman in 1725. It was quite a task as the estate covers 4,000 acres (1650 hectares) of rolling Cotswold countryside, down to the River Windrush. Bridgeman created wooden enclosures for the deer and added the double lime avenue leading away from the back of the house.

The estate is now home to established oaks, ash and beech trees which provide homes for local birds, insects, barn owls, badgers, foxes and 13 species of bats including the protected Lesser Horseshoe bats.

Those wanting to enjoy walking on the estate should start at the 19th century Ewe Pen Barn where information on circular walking routes is laid out and maps can be found. The old sheep pens can still be seen there. The riverside water meadows have a series of sluice gates which allow the fields to flood and improve the grazing. They are also the natural habitat for voles and wading birds.

The village of Sherborne was also part of the estate and is now owned by the National Trust, including the Post Office, shop, school and social club. The East End of the village was a model village, built in the 19th century, while the older West End has more of the original and older village properties.

Days Out near Lodge Park and Sherborne Estate

Places to Visit near Lodge Park and Sherborne Estate