You are here:  Attractions -> Things to Do in Somerset -> Cheddar Caves and Gorge 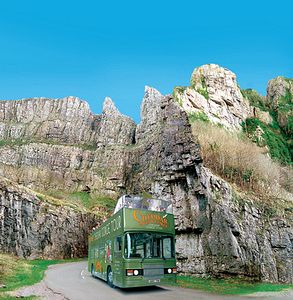 Home of authentic Cheddar Cheese, the tiny town of Cheddar in the Somerset Mendips is also the location of Britain’s most spectacular gorge. The dramatic scenery, caverns, activities and historic shops make Cheddar a popular day trip, attracting more than 500,000 visitors every year.

The best way to appreciate Cheddar Gorge is by driving up the twisting narrow road, dwarfed by the 450-foot high cliffs and rocky pinnacles on either side of the road.

The gorge was formed about three million years ago when a small river cut through the soft limestone. Thaws of subsequent ice ages increased the flow at times to produce this spectacular natural attraction. You can still see the benign-looking river which now flows underground and appears at 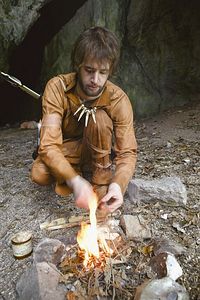 the foot of the gorge.

The Cheddar Caves remained undiscovered until 1837 when a local man, George Cox, was digging out some limestone near his watermill and he discovered Cox Cave, which was named after him. The walls, stalagmites, and stalactites have interesting orange hues due to the iron-oxide in the water.

In 1903 a pit was excavated at the entrance to Gough’s Cave and a skeleton was uncovered. Nicknamed “Cheddar Man” it is now on display at London’s Natural History Museum. However, a replica of the skeleton can be seen at Cheddar’s Museum of Prehistory which has a wonderful collection of flint tools and artifacts from the area.

At the bottom of the Cheddar Gorge is a pleasant collection of small shops squeezed against the backdrop of the cliffs. The Cheddar Cheese Company Shop offers cheese-making demonstrations and samples. It is truly the tastiest cheddar you will find anywhere, and a great souvenir of your visit!

Old fashioned sweets are made in neighbouring shops as well as the usual gift shops selling postcards and souvenirs. There are plenty of pubs and cafés offering light refreshments and afternoon tea in this charming village.

Jacob’s Ladder is a flight of 274 steps hewn out of the tall cliffs. Climb to the lookout tower at the top for wonderful views of the Somerset Levels, the Mendips and parts of Cheddar Gorge itself.

This is a starting point for many hikes in the area, including a three-mile circular walk along the top of the gorge, returning down the opposite side. One of the highlights of the walk is the 400-foot high Pinnacles, the highest inland cliff in Britain.

Rock climbing is a popular pursuit in the gorge, following in the crampons of mountaineer Sir Chris Bonington, who first climbed the cliff in 1965.

Cheddar Gorge presents a popular challenge for cyclists and is frequently included in cycle road races, if you prefer to be a spectator

Days Out near Cheddar Caves and Gorge

Places to Visit near Cheddar Caves and Gorge