You are here:  Attractions -> Things to Do in Somerset -> Glastonbury Tor 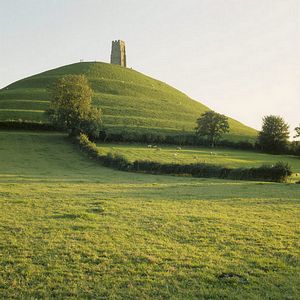 Visitors looking for a pleasant walk combined with a historic site which is possibly the resting place of the Holy Grail will enjoy a visit to Glastonbury Tor. Although at first appearance it is a simple conical hill topped by a ruined tower which dominates the skyline, visitors from around the world come to this site as a pilgrimage or out of curiosity, to experience this natural attraction for themselves.

A "tor" is the Celtic name for a small hill, and Glastonbury Tor stands out as a conical peak on the otherwise flat land around Glastonbury. The area would have been under water until about the 4th century when the Somerset Flats were drained. The area was the flood 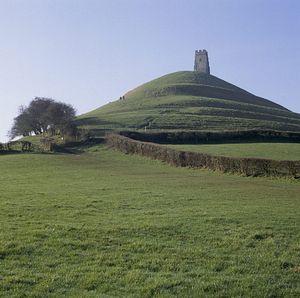 plain of the River Brue making Glastonbury Tor stand as an island amidst the marches. It would have been accessed by a boardwalk or causeway at low tide and the remains of the Sweet Track found here date back to 3800BC.

A steady climb up one of the pathways to the summit of Glastonbury Tor brings hikers to the partially restored church of St Michael. Neolithic tools and the remains of a 5th century fort have also been excavated. A stone circle, similar to Stonehenge, may also once have stood on the crest of this 500-foot high hill.

Perhaps more exciting and unique is the legend that the Holy Grail, the cup from the Last Supper, was brought to Glastonbury by Joseph of Arimathea after the crucifixion of Christ and hidden in the area.

The idea was further substantiated by the discovery of the 12th century graves of King Arthur and Queen Guinevere near the hill, reviving the idea that Glastonbury Tor was the mysterious "Isle of Avalon". The bones were re-buried in a black marble tomb which can be seen at nearby Glastonbury Abbey.

The same circular design has been found on Cretan coins and along the paths leading up to Tintagel Castle, the home of King Arthur.

New Age believers interested in ley lines which are said to have magnetic power and psychic energy, will also be interested to know that Glastonbury Tor is the centre for the convergence of many such lines which criss-cross the globe. The ley lines link several ancient sites connected to St Michael and St George following the same azimuth or arc as the May-day sun.

The area is also said to have strange lights from time to time and is considered an area of great spiritual power.

Whatever draws visitors to Glastonbury, it certainly makes a memorable day out and is one of The National Trust's oldest and most unique sites.

Days Out near Glastonbury Tor

Places to Visit near Glastonbury Tor