You are here:  Attractions -> Things to Do in Wiltshire -> Bowood House & Gardens 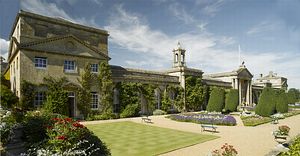 People come again and again to rediscover the enchantment of Bowood - a family stately home embracing a whole world of fascination in the splendour of a bygone age. Fine rooms filled with superb furniture, porcelain and family heirlooms collected over the centuries. The Adam Orangery, originally designed as a conservatory for orange and lemon trees, is now a magnificent gallery for important 18th and 19th century works as well as Old Masters.

The Chapel, designed by Sir Charles Cockerell, is still used for family services; the great Adam Library holds over 5,000 leather-bound volumes; and the Sculpture Gallery, furnished with superb Flemish tapestries, is remarkable for its collection of classical and 19th century marbles. You will see the Bowood 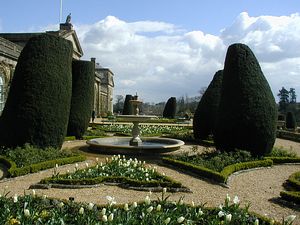 laboratory where Dr Joseph Priestley, tutor to the 1st Marquess of Lansdowne's son, discovered oxygen in 1774.

The Exhibition Rooms contain fascinating displays of furniture, pictures, ivory, costumes, silver, miniatures and other family heirlooms from Georgian times to the Indian Raj. Among the most exciting exhibits are Napoleon's death mask, Byron's Albanian costume, the glittering Kieth jewels and an exceptional collection of English watercolours, including works by Bonnington and Turner.

The house and grounds of Bowood lie within one of Britain's most beautiful parks designed by 'Capability' Brown. Gently sloping lawns stretch away from the terraced rose garden to the tranquil lake beyond, while other splendours include the Arboretum, Pinetum, Doric Temple, Cascade Waterfall and Hermit's Cave.

Bowood's Rhododendron Walks are situated in a separate spectacular 50-acre garden 3 miles from the house. This woodland garden of azaleas and rhododendrons is considered to be one of the most exciting gardens of its type in the country and is open during the six week flowering season from late April to early June.

Children under 12 love spending the whole day at Bowood playing in one of the finest adventure playgrounds in the country. Here is adventure, fun and excitement galore aboard the life-size pirate ship, complete with rigging and crow's nest! There's an amazing Space Dive (for those who dare), giant slides, chutes, trampolines, high level rope-walks - and lots more besides to keep children happy for hours on end! The brilliant under 7's play area was designed and built by the Grounds Team, using wood from the Estate, and includes low level balancing and climbing apparatus. 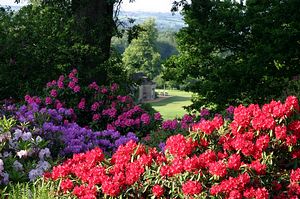 Days Out near Bowood House & Gardens