You are here:  Attractions -> Things to Do in Berkshire -> Ascot Racecourse 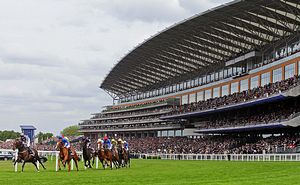 Ascot Racecourse is synonymous with quality, excellence and a truly memorable day out. The highlight of the year is Royal Ascot in June with five days of tradition, pageantry and style. Outside of Royal Ascot spectacular racing takes place throughout the year, each raceday offering a unique theme and atmosphere including a summer cocktail party in July, a '80s concert in August, Beer Festival in September and Fireworks in October as well as five dedicated family racedays and much more.

Looking back over the 300 years since the track was founded by Queen Anne, Ascot Racecourse will be proudly celebrating its tercentenary in 2011. In this uniquely historic year, racegoers are invited to enjoy the racecourse's anniversary, when it will be showcasing not only its heritage and royal connections, but also the reflection of society, and fashion through the centuries, and significantly some of the most memorable racing ever seen.

Ticket prices start for £12 per person and generous group and advance discounts apply. For more information or to book call 0870 727 1234 or visit ascot.co.uk

Royal Ascot is a national institution and the centrepiece of the British social calendar. From the 14th to 18th June tradition, pageantry, fashion and style combine at one of the most beautiful settings in the country.

The quality of the racing at Royal Ascot is simply outstanding, with £4 million in prize money on offer and a total of eighteen 'Group' races (racing's term for the most prestigious races) over the five days.

Each day follows the same format with The Royal Procession making its way from the Golden Gates, along the racecourse and into the Parade Ring from 2.00pm each afternoon. The first race of six each day is at 2.30pm and the last race is at 5.35pm, after which racegoers are invited to celebrate their winnings as they sing traditional favourites, and a few new ones, around the bandstand.

As well as being home to the very best flat racing action, Ascot also stages five days of breathtaking jump racing from October to December. The jump season at Ascot features some of the most important races in the calendar, in particular, the racing held on Saturday 19th November. So, put your winter coat on and travel down to Ascot for a great day out.

Days Out near Ascot Racecourse

Places to Visit near Ascot Racecourse