You are here:  Towns -> Places to Visit in Highland -> Ullapool

Things to do in Ullapool, Highland 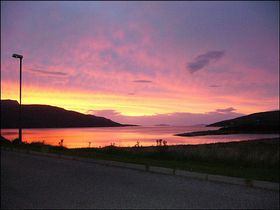 Ullapool nestles on the shores of the Bay of Loch Broom, 56 miles north west of Inverness in Ross and Cromarty, Highland.

The lockside settlement was founded by the British Fisheries Society as a herring port back in 1788. It owes its design and layout to Thomas Telford, better known for his bridge and canal construction.

When herring fishing declined around 1900 due to overfishing, the town was left as a delightful place to live with no economic activity. Eventually long distance fishing fleets were persuaded to use Ullapool as a safe anchorage.

In the late 1970s it was used as a base for Russian and East European fishing vessels from April to January. These "Klondykers" were fish processing factory ships supplied by fleets of smaller boats. The mackerel was prepared for market and frozen before being shipped to European markets.

The harbour is still used for local fishing boats along with leisure craft, yachts and the MV Isle of Lewis ferry to Stornoway in the Outer Hebrides.

During Victorian times the area played an important part in understanding plate tectonics and it still hosts international geological conferences.

Ullapool is a pleasant community of around 1,300 inhabitants. It is the largest town in the area and is an important centre for tourism.

Ullapool is a well known centre for the arts and music with the MacPhail Centre hosting theatre and dance performances by national touring companies as well as performers from the Edinburgh Fringe.

It is known for its mild climate, thanks to the nearby North Atlantic Drift; visitors may be surprised to see a few palm trees growing in the area!

The picturesque town is made up of white-washed houses along the waterfront and a good choice of local shops in the town centre. There is a leisure centre, swimming pool and a 9-hole golf course. The town has a local shinty team (like hockey) known as the Lochbroom Camanechd.

Ullapool has many delightful pubs which offer reasonably priced food. The best known is the Arch Inn, the first building to be established in Ullapool in 1788. It was originally a general store and inn for the fishermen and curers, with stables at the rear.

Close to the pier is a large area where cars line up for the ferry. Occasionally the town is visited by the small cruise ship Hebridean Princess.

Things to Do Around Ullapool

Ullapool is surrounded by rugged mountains which attract hill walkers, climbers, geologists, nature lovers and those who enjoy fishing and deer stalking.

Some of the highest peaks are An Teallach, which means Anvil (3,484 feet), to the south of Ullapool and Beinn Dearg (3,556 feet) to the east. They are two of the best-known Munros in the area, which are Scottish mountains exceeding 3,000 feet.

Visit the award-winning Museum and Visitor Centre in Telford Church and the Arts Centre which has a regular program of workshops and exhibitions.

Corrieshalloch Gorge is a spectacular box canyon with the 150-foot high Falls of Measach. 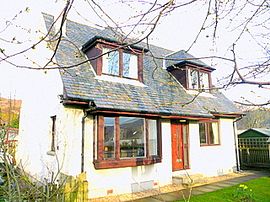 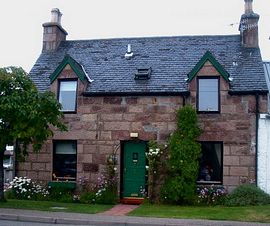 more self catering near Ullapool...

Days Out in Ullapool

Places to Visit near Ullapool