You are here:  Towns -> Places to Visit in Devon -> North Bovey

North Bovey is situated in the middle off the northeastern quadrant of Dartmoor, about one and a half miles south of Moretinhampstead. The village has its church, pub and a water pump. And apart from a little green, a clutch of whitewashed thatched cottages and a modern row of half a dozen slate-roofed, granite-built, terraced houses (for modern read - "built 1894") that's about all there is to the place.

The village's heyday was in the 14th and 15th centuries when it was a relatively prosperous tin mining village, with both open cast and shaft workings, the tithes from which were used to build the church (St. John the Baptist).

With the decline of tin mining towards the latter half of the 19th century the village's fortunes waned until W H Smith (of the newsagent, stationer and bookseller fame) acquired the land of the former Earl of Devon. W H Smith's son Frederick inherited the estate in 1891 and built his family home a mile or so west of the village (which is now the Bovey Castle Hotel).

Frederick invested substantially in the village, renovating farms and houses and building the modern row of terraces as housing for his estate workers and the village's population reached its zenith of over 600 people.

The structure of the modern village is pretty much unchanged since the turn of that century and because it is now part of the Dartmoor National Park Conservation Area is unlikely to do so for the foreseeable future. The downside of this is that many of the workers' houses have now been bought by wealthy outsiders as second homes which whilst maintaining the village's idyllic appearance has led to the actual population (for the parish as a whole) shrinking to about 250.

Whilst the modern village green is pretty in a true postcard sense it is however a tad manicured for my tastes. In the 1950's and 60's the village had a couple of shops, a Post Office and a primary school and the village green was the true village centre where children played and locals passed the time of day.

Unfortunately the shops and Post Office are now gone but it has retained its wonderfully archetypal 15th century inn called the Ring O'Bells. This is a pretty much perfect pub, with a handful of letting rooms, and with all the bits and bobs you would associate with a proper English hostelry. The thick stone walls and luxuriantly thatched roof seem timeless (although they have been recently renovated at considerable expense) whilst inside the warren of connected public rooms offer cosy spaces, both intimate and convivial, with a multitude of characterful and original features and fittings.

As well as the pub there are a couple of friendly guest houses and as a place to get away from it all, and perhaps do some moorland walking, you'd struggle to find anywhere more peaceful than North Bovey. 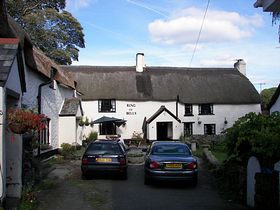 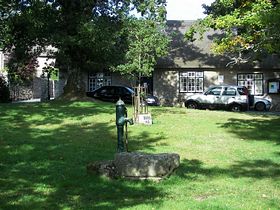 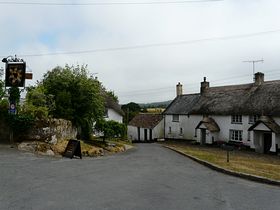 Days Out in North Bovey

Places to Visit near North Bovey