You are here:  Attractions -> Things to Do in Highland -> Strathnaver Museum 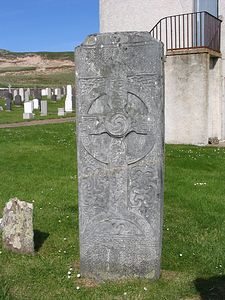 Strathnaver Museum is a locally run museum which first opened to the public in 1976. It is housed in what was St Columba's Parish Church at the eastern end of Bettyhill on the north coast of Sutherland.
These are a few of its many attractions:


The clearance of the people from Sutherland to make way for sheep farms has been the subject of much debate and deep emotion. In modern Strathnaver many ruins of pre-clearance villages can still be seen, among them Rosal, where Donald Macleod, who wrote "Gloomy Memories", was born. The museum tells the story with graphics, artefacts and models. The local schoolchildren have contributed by writing the story on display as well as providing paintings and models…..plus a great deal of enthusiasm!


This is housed on the upper floor of the building. The area of Strathnaver, which at one time covered a large part of north and west Sutherland, was all Mackay country. The Clan has a very rich and varied history boasting several Clan Societies throughout the world. These societies and other clan members have contributed most of the exhibits and information on show in this room.


Opposite the west door of the Museum building and situated within the graveyard, lies the Farr Stone, an 8th-9th C. Christian, carved stone slab. Several 18th C carved and inscribed gravestones can be found within the museum.


The Strathnaver area abounds with archaeological sites and in the museum can be seen an early beaker, which was found in a burial kist close to the River Naver. The name Naver reflects the strong Norse influences which Sutherland has experienced in the past.


There is a selection of books and a Brief History of the Museum and the Evictions on sale within the museum (see our website). There is car parking close to the museum as well as a tourist office, craft and coffee shop.

Days Out near Strathnaver Museum

Places to Visit near Strathnaver Museum