You are here:  Towns -> Places to Visit in Greater Manchester -> Oldham

Things to do in Oldham, Greater Manchester 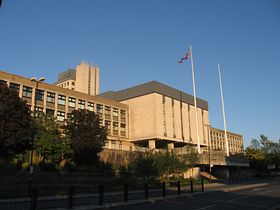 Oldham sits high on the Pennines, surrounded by hills and offers many vantage points for viewing many miles around.

Oldham can be dated back to 865 A.D. when Danish invaders settled here, but it was the industrial revolution and cotton, that brought prosperity to Oldham. By the end of the 19th century Oldham was recognised as being the greatest cotton spinning town in the world.

By 1850 Oldham had 550 drinking establishments and it is thought only over half of them were legal. It is said brothels and gambling would be rife in many of the old Ale Houses.

We mustn't forget the coal mines because Oldham had 14 collieries. Coal was plentiful and lay just below the surface on the hills. Local people could just help themselves to it, hardly any digging needed to be done.

So many famous people have come from Oldham. Mark Owen from Take That, Philip Schofield, Eric Sykes, Dora Bryan, Bernard Cribbins, Dame Eva Turner. A lot of the cast from the famous T.V. production Coronation Street, including Sarah Lancashire, Barbara Knox, Anne Kilbride; the list goes on and on and many have the Oldham Repertory Company to thank for that; the good old Oldham Coliseum Theatre. Louise Brown the world's first test tube baby was born in the Oldham Hospital and Sir Winston Churchill was M.P. for Oldham in 1900.

Oldham Town Centre has two shopping malls, The Spindles and Town Square, but they seem as one as they join together. There is a big indoor Market Hall and various other shops along the High Street and all what you would expect to find in any town centre shopping place.

The most favoured tourist part of Oldham lies in Saddleworth and it's villages. Delph, Uppermill, Greenfield, Dobcross, Diggle, and not forgetting Denshaw and Lydgate. They are very old-world delightful villages. The canal is a major part of the attraction with brightly painted barges and boat trips offering teas and snacks. Dovestone's reservoir at Greenfield is another beauty spot and attracts campers, walkers, rock climbers and those wishing to sail their boats.

The film "Yanks" was made at Dobcross village and also the film "Brass" was made in and around the Saddleworth villages.

The Oldham Owl can be seen on Oldham's crest and is widely incorporated as a mascot or symbol of the town. It originates from the old pronunciation of Oldham which is "Owldum". 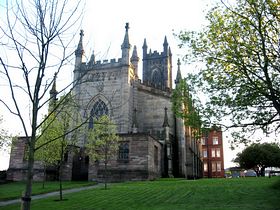 Oldham parish Church. Present building dates from 1830 but there has been a church building on the site since 1280 © Anne Rodgers

more self catering near Oldham...

Days Out in Oldham

Places to Visit near Oldham