You are here:  Towns -> Places to Visit in Northumberland -> Norham

Things to do in Norham, Northumberland

‘Norham Village' Northumberland (more than a village and once a shire)

In historical terms the small village of Norham (known locally as Norrum) punches far, far above its weight. It has been a violent and strategic buffer against the marauding Scots and Border Reivers over many centuries past, both a religious sanctuary and a strong military outpost. Here at the second most northerly village in England we are nearly within hailing distance of Branxton and the two-nations clashing point of Flodden Field, scene of bloody conflict and marshal-murder in the year of 1513.

Nestling in the fertile pastures of the lower Tweed Valley on the winding banks of the glorious River Tweed, famous for its salmon fishing and only eight miles from the coast and Berwick Upon Tweed, Norham has been witness to many violent deeds. Nowadays its peaceful main street is a delight to the eye with the only discordant note being the eerie call of the oystercatchers and curlews circling high above the River.

Cross the narrow stone bridge to the far bank of the Tweed and a white saltire on a blue background welcomes you to Scotland.

Surrounded by the beautiful, rolling Cheviot Hills to the south and the wild Lammermuir Hills to the north, the houses of Norham now sleep on in peaceful bliss, like innocent babes, a pleasant mixture of neat rural cottages and larger villas, roofs being constructed of grey slate or cheerful red pantiles.

It possesses a shop or two, a church, currently two pubs and a ruined castle high on a hill overlooking the village. The people are friendly yet ruggedly independent, as you'd expect, living in what was once described as the most dangerous place in England with the long dead ghosts of a turbulent history lurking under almost every stone and blade of grass.

The ancient church of St. Cuthbert's at the north end of the village is partly of Norman origin and its ornate 17th. Century Pulpit came from Durham Cathedral.

‘Norhamshire' once belonged to the Prince Bishops of Durham, the castle being built by them in 1121).

The church is sturdily constructed with lichen growing over many of the gravestones and is said to have been a base for ‘Robert the Bruce' as he laid siege to the castle in his dispute with John Baliol.

St. Cuthbert's Church was later ill used by Oliver Cromwell's ‘Roundhead Army' and musket ball scars are still evident under the window on the southeast corner of the Chancel exterior.

The wide triangular village green has a splendid market cross on a Celtic base and as you exit the village by the Berwick road you take a steep climb to the castle hilltop. This magnificent ruin overlooking village, river and Scottish Borders has a Norman keep and is in the care of English Heritage. If you have time to linger here and reflect for a while, especially on a misty day or at dusk when the bats come out, you may catch a hint of momentous happenings from its kingly past as immortalised in Sir Walter Scott's epic poem ‘Marmion'.

John Baliol of Barnard Castle swore fealty to the English King Edward at Norham Castle in 1292, later to be crowned at Scone.

Coming down to earth and more recent times, Norham had it's own vibrant and pretty little railway station until the last train ran through in 1965. The station remained until recently as a well-kept museum by the stationmaster's wife, for lovers of railway memorabilia and village life of a bygone era. 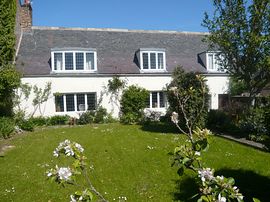 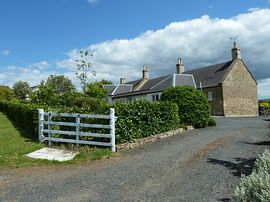 more self catering near Norham...

Days Out in Norham

Places to Visit near Norham