You are here:  Towns -> Places to Visit in Scottish Borders -> Lauder

Lauder is set 600 feet above sea level, and is the main town in Lauderdale, bounded on three sides by the Lammermuir Hills. The town preserves its original medieval form with a single main street widening into the Market Place, dominated by the old Tollbooth.

The A68 through the town follows the oldest established route between Edinburgh and England, and has witnessed the passage of many armies. Today the Southern Upland Way, Britain's first coast to coast footpath passes through Lauder on its 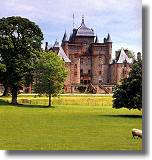 Lauder Parish Church is laid out unusually in the form of a Greek Cross, with the pulpit in the centre under the octagonal bell tower, and the old box pews retained.

To the north is the quiet village of Oxton, whilst 6 miles south is Earlston and the ruined Rhymer's Tower, once the home of Thomas the Rhymer, the 13th century poet famed for his gift of prophecy.

For leisure and recreation Lauder has a 9 hole golf course, a tennis club and bowling club.

Days Out in Lauder

Places to Visit near Lauder