You are here:  Towns -> Places to Visit in North Wales -> Betws-y-coed

Things to do in Betws-y-coed, North Wales

The village of Betws-y-Coed (pronounced Betoos - er - koid ) is in the wooded Conwy valley of North Wales. The unusual name means "prayer house in the woods".

Betws-y-Coed is in the beautiful Snowdonia National Park, close to where the River Conwy merges with the Llugwy and Lledr rivers.

The oldest trace of civilization is the Capel Garmon burial chamber nearby. This Neolithic burial site dates back to the 3rd millennium BC.

The first settlement at Betws-y-Coed was a monastery in the 6th century and the village grew up around it. Lead mining was one of the early local industries.

St Michaels Church was built in the 14th century and is one of the oldest churches in Wales, set amidst yew trees and housing a mediaeval stone effigy.

There was very little development prior to 1815 when Thomas Telford built the cast iron Waterloo Bridge over the River Conwy, carrying the A5 road. The town became a coaching centre for travellers heading to Corwen or Capel Curig. It was also on the Irish mail route from London to Holyhead.

In 1868 Betws-y-Coed got its railway station and link to Llandudno Junction and the population swelled to 500 people!

Betwys-y-Coed currently has 534 residents, according to 2001 census figures. It is a natural meeting place where rivers, valleys and roads converge.

This charming typical Welsh village has stone and slate houses around the large village green, home to the local football pitch and playing field.

The Church of St Mary is on the site of a former fairground and cock-fighting pit. Although it looks "as old as the hills" it was actually completed quite recently, in 1873. The interesting interior makes use of local bluestone, sandstone and black serpentine imported from Cornwall.

The church hall is even newer, opened in 1976 by the Earl of Ancaster.

The attractive railway station is served by Arriva trains on the Conwy Line. The former goods yard is now the home of the Conwy Valley Railway Museum.

Things to Do Around Betws-y-Coed

The area is popular with walkers, cyclists and outdoor enthusiasts with many trails through the forests and mountains. The River Llugwy also offers pleasant walks. The River Conwy passes through Fairy Glen, the magnificent Conwy Falls and the fish pass.

The famous Swallow Falls are a mile upstream from Betws-y-Coed. Other local natural features are the Pont-y-Pair Falls and the 53-hole rock cannon.

Fishing and watersports can be enjoyed on the Llyn Elsi Reservoir.

Take a ride on the miniature railway which is part of the Conwy Valley Railway Museum. The restaurant is in a former railway buffet car. The village also has a Motor Museum which contains a fine selection of vintage cars.

Many visitors buy fish and chips and sit beside the Pont-y-Pair bridge, which means "bridge of the cauldron", watching the water foam and swirl around the bridge.

The 13th century Dolwyddelan Castle sits overlooking the Lledr Valley and has two towers linked by a curtain wall. There are stunning views of the surrounding area from its lofty position.

Ty Mawr is near Betws-y-Coed and was the birthplace of Bishop William Morgan who translated the bible into Welsh. 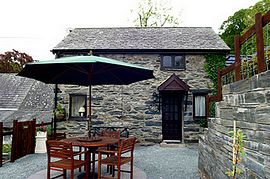 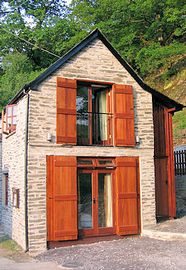 more self catering near Betws-y-coed...

Days Out in Betws-y-coed

Places to Visit near Betws-y-coed