You are here:  Counties -> Things to do in Worcestershire

Worcestershire is one of the counties comprising the 'Heart of England'. There are industrial pockets in the north, but all are within easy reach of the countryside. In the central and southern areas of the county, Worcestershire remains delightfully rural.

Worcestershire has much to offer visitors with two Spa towns, the Severn Valley Railway, stately homes, and the lovely countryside of the Vale of Evesham. Walking, fishing, canal boating, horse racing can be enjoyed in the county, as can first class cricket.

A Worcestershire Tourist Information office is in the Guildhall, High Street, Worcester, the county town and ancient cathedral city.

Worcester is home of Royal Worcester Porcelain and you can take a tour of the factory. There is also the Dyson Perrins museum. There's lots to enjoy if exploring the city centre. You can visit the magnificent 11th century Worcester Cathedral and the Commandery - a museum specialising in the Civil War period.

You might be lucky enough to catch a cricket match at the County Cricket ground in its lovely riverside setting, or you may decide to spend a day at Worcester Racecourse - one of the oldest in the country. A short distance out of the city, at Blackheath is the Elgar Birthplace Museum. This is a traditional, brick-built Worcestershire cottage set in a tranquil garden.

Droitwich Spa became a spa town in the Victorian era, and is the only salt-water spa town in Britain. Here visitors can enjoy the therapeutic benefits of the waters and discover the history of the town.

In the north of the county, you will find Redditch - famous for needle making and designated a new town in 1964. The Arrow Valley Country Park offers a great day out for families.

Nearby is Bromsgrove - known for its ironwork. The town supplied the gates for Buckingham Palace. A famous son of Bromsgrove was the poet A.E. Houseman, who was educated at St. Edwards School.

The Wyre Forest takes its name from the Forest of Wyre. Once a medieval hunting forest, today there is an attractive visitor centre and forest walks. The Severn Valley Railway passes through 16 miles of glorious countryside from Kidderminster to Bridgenorth. The main towns are Kidderminster, which has been famous for its production of carpets since the 18th century. The town was the birthplace of Rowland Hill, inventor of the penny post. Gardeners should visit Stone House Cottage Garden, an outstanding walled garden with unique towers. Harvington Hall, an Elizabethan moated manor house, is well worth a visit.

Bewdley is a graceful town with many fine Georgian buildings. Thomas Telford's stone bridge makes a striking crossing over the River Severn. There is an excellent Museum where you can learn more about the Wyre Valley.

All the family will enjoy a day out at the West Midlands Safari Park at Bewdley. Here you will meet many wild animals and find plenty of attractions.

Stourport on Severn developed with the building of the Staffordshire and Worcestershire Canal in the late 1700s. It was once one of the busiest inland ports in the midlands. Today it retains its lovely Georgian buildings and is a centre for the pleasure boats cruising the canal and the Severn River. 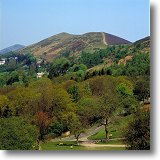 Tenbury Wells, known as the 'Town in an Orchard', is situated in the valley of the River Teme - a fertile valley known for growing hops, fruit, holly and mistletoe.

Upton on Severn is known for its annual jazz, blues, water and folk festivals. You can visit the 'Pepper Pot' heritage centre to learn more about this historic town's past.

Pershore, situated on the banks of the River Avon, has many elegant Georgian buildings. The Norman Abbey, whose magnificent lantern tower was built in the mid 1300s, survived the Reformation to become the parish church.

The Vale of Evesham, in the south of the county, is known for the production of fruit and vegetables.

The picturesque town of Broadway lies in the south east of Worcestershire, on the edge of the Cotswolds. This is a charming little town built from the local honey coloured stone. The nearby Broadway Tower & Country Park is well worth a visit.

Days out in Worcestershire


Places to Visit in Worcestershire