You are here:  Towns -> Places to Visit in Worcestershire -> Tenbury Wells

Things to do in Tenbury Wells, Worcestershire

Tenbury lies in the northern part of the Malvern Hills District and borders Shropshire to the north and Herefordshire to the south and west. It is on the south side of the Teme Valley and is built on the valley's flood plain. Tenbury has been a major river crossing since the Iron Age when it connected many Iron Age forts, such as Clee Hill in the north and Garmsley in the south. It would have been crossed as a ford and it may be that the Castle Tump, now lying on the north side of the river was built to protect this crossing.

Tenbury Wells had the "Wells" added to its name late last century to help promote the Mineral Water Wells that had been found in the Town from 1840 onwards. Since the 18th century it has also been known as the "Town in the Orchard" after the many cider apple orchards that surround the town.

The mineral waters found in 1840, brought about the building in 1862 of the now restored Tenbury Spa. The Spa, or Pump Rooms, has been described as "Chinese Gothic" and was designed by James Cranston of Birmingham. One of the earliest examples of prefabrication, with the sheets of wrought iron being made in Birmingham, and assembled on site.

The town tried to make the Spa a going concern, but it came too late to emulate the larger Spas, like Bath and Leamington.

St Mary's Church, is worth visiting, much restored in the 19th century, it has a Norman Tower and inside the well preserved Acton Tombs and the shaft of an Anglo-Saxon Cross.

There are several 17th century half-timbered buildings in the town, the most ornate is the Royal Oak, with the oldest probably being The Pembroke House. There is the unusual Round Market built to enable farmers' wives to sell their butter and poultry inside, with walls to keep out the weather.

Market days are Tuesday's and Thursday's, not to be missed are the annual Holly and Mistletoe sales held on the Tuesdays before Christmas.

There are many sports activities including golf, fishing in the River Teme, tennis, cricket, soccer, rugby and swimming in the indoor pool. Walkers will enjoy the beautiful countryside to be discovered in the Teme Valley. 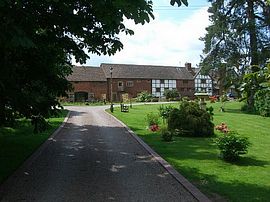 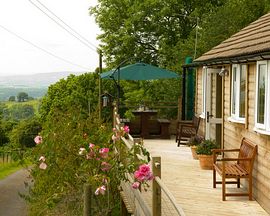 more self catering near Tenbury Wells...

Days Out in Tenbury Wells

Places to Visit near Tenbury Wells