You are here:  Towns -> Places to Visit in Kent -> Dymchurch

Things to do in Dymchurch, Kent

The small village of Dymchurch is on the edge of the Romney Marshes in southeast Kent.

Located five miles south west of Hythe, it is the epitome of a traditional seaside town for family holidays, with miles of sandy beach and ample amusements.

The village of Dymchurch owes its existence to the nearby Romney Marsh.

The original sea wall was built by the Romans to protect Port Lymphe harbour and the rich alluvial soil became fertile farmland.

The New Hall was built in 1575 for the Leveller of the Marsh Scots who collected payment from the locals for the maintenance of the sea wall.

Residents were also obliged by law to grow thorn bushes to build the seawall, as thorn branches were initially thought to deter the seawater!

Those who lived outside the jurisdiction of the Marsh Scots were not obliged to pay the tax, and this is where the saying "Getting off Scot free" came from.

Like much of this coast, smuggling was a major occupation in Dymchurch during the 17th and 18th centuries, to avoid paying the heavy export tax on wool destined for Europe.

In the 19th century, Martello Towers were built for defence against Napoleonic attacks.

Most eventually fell into ruin, but Tower 23 was converted into a private home.

Tower 24 is now owned by English Heritage and contains a Museum of Martello Towers. Tower 25 is empty but is also kept maintained.

Dymchurch Redoubt was an eleven-gun tower built in 1806 to keep supplies for the local Martellos.

The town expanded in the 1930s and many of the early homes were actually converted railway carriages, a few of which remain at Dungeness.

Set behind a 4-mile-long sea wall, the village of Dymchurch swells with summer tourists.

With a permanent population of around 3,600 residents; it has a primary school, two newspapers, banks, shops and cafés serving both locals and visitors.

The parish church of St Peter and St Paul is a Norman structure, dating back to 1150.

It remained unaltered for almost 700 years. The extension in 1821 gave the church a rather unbalanced look.

As well as the beautiful beach, the town has an amusement park with a Log Flume ride, Ghost Train and Dodgem cars.

Dymchurch is the fictional home of Doctor Syn, created by novelist Russell Thorndike.

Each alternate year on August Bank Holiday, the villages celebrates with a Days of Syn Pageant.

Things to Do in Dymchurch

Dymchurch Beach has an endless stretch of sand reaching from Dungeness in the west to Folkestone in the east.

It gently slopes and is ideal for donkey rides, building sandcastles, sunbathing and flying a kite. It boasts blue flag award clean waters for bathing.

The countryside surrounding Dymchurch is flat and rural - ideal for walking and cycling along quiet country lanes.

Alternatively, pick up the cyclists' pack from RMCP and enjoy the five cycle routes, ranging from 10 to 42 miles.

There are also nine self-guided walks, from three to nine miles in length, also from the RMCP. 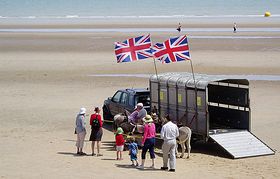 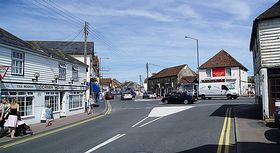 A view of the High Street at Dymchurch, Kent, UK, looking from Eastbridge Road (c) Ian Dunster via Wikimedia Commons 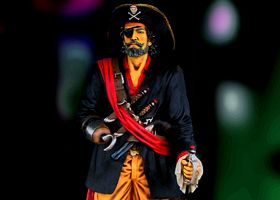 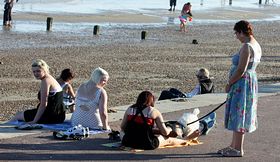 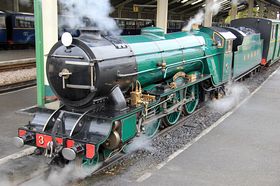 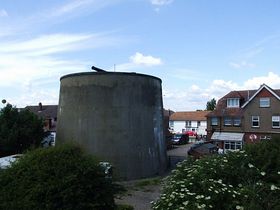 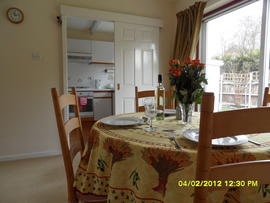 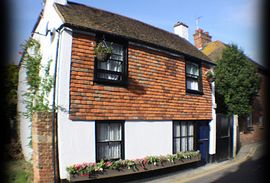 more self catering near Dymchurch...

Days Out in Dymchurch

Places to Visit near Dymchurch