You are here:  Attractions -> Things to Do in East Sussex -> Batemans 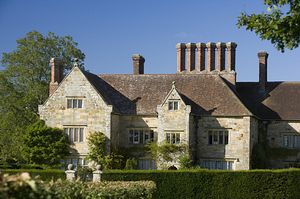 The homely sandstone house of Bateman's was the former home of Rudyard Kipling from 1902 to 1936. Literary fans will recognize the house which is mentioned in his autobiography "Something of Myself" and the nearby Pooks Hill mentioned in "Puck of Pook's Hill".

Kipling is best known for his Jungle Book and Just So Stories although he also wrote prose and poetry. The house is now managed as an appropriate memorial to him, filled with his personal memorabilia.

Visitors will see the date of 1634 over the door as they enter this lovely home. At that time, Sussex was a flourishing centre for the iron industry with its ready supply of charcoal from the forests of the Sussex Weald. 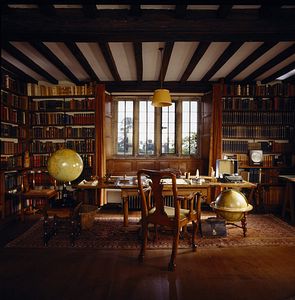 17th century house with its mullioned windows, rounded arch over the porch and oak beams is as charming as the day Kipling and his American wife Carrie saw and fell in love with it. Look for the family's hand-carved initials on the stone doorpost as you enter.

At the time the Kipling family moved in, Bateman's was completely unmodernised but it became a quiet sanctuary for his writing and for their children to be raised. The family had electricity, a bathroom and running water installed but Kipling insisted on no telephone being connected. They also maintained the many open fireplaces in which Kipling disposed of his scrap manuscripts.

The family entertained modestly, including some famous names such as Prime Minister Stanley Baldwin, Kipling's cousin, and the fellow-writer, Rider Haggard.

Visitors today will recapture the atmosphere of the happy family home in the oak-panelled parlour where games where played with the family dogs. The parlour, as with much of the rest of the house, has many of Kipling's personal items, brought from India and the Far East when he was a journalist there. 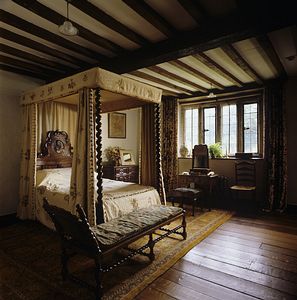 and foliage bought on a visit to the Isle of Wight. The study is just as Kipling left it, with the ink stained desk, Good Companion typewriter which he claimed "simply won't spell", his pen nibs, library and day bed.

The rose garden, yew trees and pond were all laid out by Rudyard Kipling using the £7,700 which he received from the Nobel prize in 1907. The walled garden and terraced lawns can still be seen in this formal garden, along with his 1928 Rolls Royce. Visitors can also stroll along the river to see the working watermill.

Kipling died at Bateman's in 1936 and when his wife died three years later she bequeathed the house to the National Trust as a living museum of his life and work.

The rose garden has since been restored and visitors were offered the chance to sponsor a rose, raising funds to maintain this lovely home, whilst claiming a small part of Bateman's for themselves.

Visitors to this lovely home should bring a picnic to enjoy in the Picnic Glen or indulge in afternoon tea in the National Trust café after browsing the books and souvenirs in the Bateman's shop.

Days Out near Batemans

Places to Visit near Batemans