You are here:  Attractions -> Things to Do in Derbyshire -> Longshaw Estate 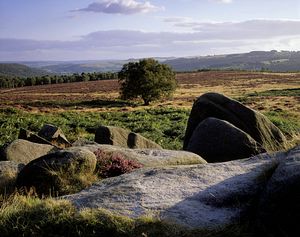 Set in the beautiful Derbyshire countryside and enjoying spectacular views of the Peak District, the Longshaw Estate reveals some of the area's most fascinating local history. From millstone quarries to packhorse routes across the heather moorland, the hidden past can be discovered with a local guidebook or by following one of the National Trust family trails.

The informative Visitor Centre is in part of the former Shooting Lodge which once belonged to the Duke of Rutland. It was built in 1827 as a retreat for hunting guests such as George V and the Duke of Wellington who visited the splendid hunting estate. It was later converted into holiday accommodation.

The Visitor Centre is the best place to begin your 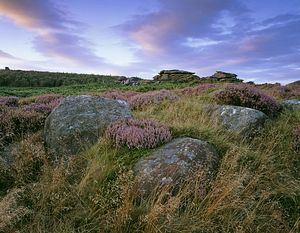 historic discovery quest or to simply plan a ramble along the heritage trails amidst the ancient woods and open parkland. Routes take hikers through various types of terrain from hay meadows to high heather-covered moors.

Those who remember the BBC TV program "One Man and His Dog" will perhaps recognize the area where the Sheep Dog Trials were filmed. The Longshaw Trials are the oldest continuous trials in the country and continue to be held on the estate every September, providing family entertainment and raising funds for charity.

The ancient well-worn tracks which criss-cross the heather-covered moorland have eroded over the centuries to become sunken "holloways". Other interesting features to look out for are the pair of guidestoops or milestones which were created in the 18th century to aid travel in this remote area, as ordered by an Act of Parliament.

The area is scattered with evidence of earlier settlements dating back to the Bronze Age. Look for the telltale ring cairns and the remains of hut circles on the moors. The Longshaw Estate is also littered with a fine array of worn millstones. Quarrying at Yarncliffe Quarry began in 1466 and 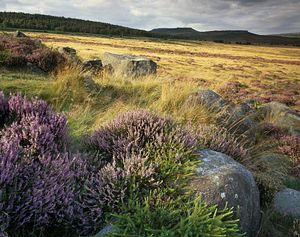 it produced many of the millstones which were made from the local millstone grit.

The Longshaw estate was purchased from the Duke by public subscription in 1927 and the land was then presented to The National Trust.

The extensive estate covers a vast area around the scenic Millstone Edge and Bole Hill, including the small village of Hathersage and almost down to Grindleford. This Derbyshire village is in a beautiful setting where several roads converge at the bridge and an old ford can still be seen, which was an important crossing point in the past.

Walks to Padley Gorge take visitors through ancient oak woodlands to this Site of Special Scientific Interest, noted for its plants and wildlife.

Although it is just a short drive from the conurbation of Sheffield and is visited by thousands of walkers each year, the Longshaw Estate provides a feeling of remote and quiet serenity amidst this unspoilt countryside.

Refreshed from a bracing walk, visitors can pick up local produce and gifts in the recently renovated National Trust shop or enjoy hot snacks and refreshments at the café which are made to traditional local recipes.

Days Out near Longshaw Estate

Places to Visit near Longshaw Estate