You are here:  Attractions -> Things to Do in Norfolk -> Holkham National Nature Reserve

The Earl of Leicester and the Crown Estates share possession of Holkham National Nature Reserve, which is managed by Natural England and Holkham Estates.

In its position on the Norfolk coast, exposed to the winds and storms from the North Sea, Holkham NNR is an unique and important reserve, home to hundreds of rare and significant wildlife species. The reserve requires and receives careful management to preserve it as a haven for 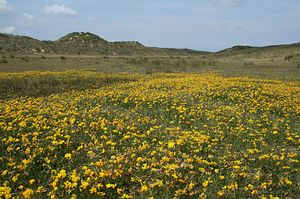 wildlife and for future generations to visit and enjoy this special place.

On a coastline with several nature reserves, Holkham is the largest and most varied, with a diversity of creeks, saltings, sandspits and dunes, marshes, green pastures and pinewoods, it offers shelter and homes to many species of wildlife unique to this area.

Most of the area can be explored by using the footpaths from the main settlements, or from the car parks. The central part of the reserve from Wells to Holkham Bay is well served by paths allowing access to the best wildlife habitats.

Visiting During the Summer Months

In late June and early July visitors to the Wells Dell will find Orchids. Little and common terns fishing in the harbour at Wells, is a common sight. Watch out for Little Terns, carrying fish to their chicks in the tern colonies.

Marsh Harriers may be spotted displaying and passing food in mid air. Watch carefully for dancing ghost swift moths at sunset. Over the Saltings a purple mist of sea lavender can be seen.

Visiting During the Winter Months

Visitors may be rewarded with sights such as Migratory birds, arriving in seablite bushes, exhausted after their flight in late October. Mixed flocks of finches, pipits and larks can be seen in Holkham Bay.

In the fields beside 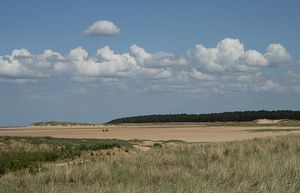 At any time of year the foreshore is a delight with its wide-open space. Children will love beachcombing, and building sandcastles; while everyone will be delighted to spot a seal, which may be seen here.

Wrap up warm for your walk, as this is an exposed place. Plants are few and far between; unable to put down roots and even shellfish have difficulty in finding food in the ever-changing sands.

However at the mouth of the Wells Channel and parts of the eastern shore the muddy conditions provide plenty of food beneath the surface. There are lugworms and cockles, which long-beaked wading birds such as oystercatchers and curlews have no difficulty in finding.

While the shorter beaked redshank, dunlin and grey plover search over the surface of the mud, finding worms and mussel larvae. Energetic birds like ringed plovers and sanderlings are attracted to the tide-line, running backwards and forwards between the breaking waves to collect their favourite food.

Inlets and creaks sheltered from the pull of the tides are where saltmarsh develops. Sediments from the sea gather and over years layers 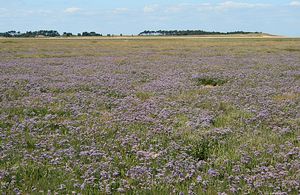 build up, summer winds and sunshine dry out the lower mudflats and become frosted with salt crystals.

The only plants to survive the salty desert conditions are seablite and glasswort. On the middle and upper levels of Holkham's saltmarshes several plants thrive, such as Sea Aster, which resembles Michaelmas daisies with pale magenta flowers.

Widespread coverings of Sea Lavender produce a soft blue mist and clumps of Matted Sea Lavender can also be found.

The upper marshes are distinctive by the dark green stocky shrubs of Seablight, which is common along this coast. It provides the first shelter for birds who may have been blown off course as they arrive on this coast in October.

During the breeding season on the mid and upper marshes, you can hear the worried call of the Redshank from its nesting ground in the tussocks. It feeds in the creeks and muddy saltpans.

The marshes are still a busy area in winter, with Brent Geese, Shelduck and Waders busily grazing; highlighted by the evening sunlight against the wide horizon of the Saltmarshes. Nature lovers and bird watchers visit the Holkham NNR at this time of year to appreciate one of the wildlife highlights of Europe.

Although Britain's climate is different to that of the world's well-known deserts, where parched days, cold nights 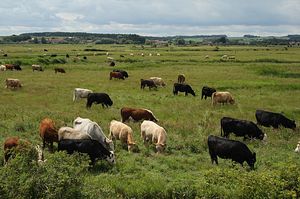 and mountains of sand are affected by storms, much of the east coast of Britain bounded by the North Sea storms suffer similar effects.

The landscape of dunes at Holkham can change quickly, due to the effect of harsh winds and water. The high dune islands in Holkham bay have built over the last sixty years, but after harsh storms the higher ridges can disappear overnight.

Plants in this environment have to be hardy to survive. Sea sandwart, sand couch grass and marram grass help to bind loose sand and create the foundations of the dunes. These early dune and shingle systems create nesting areas for shore birds.

Ringed Plovers and Oystercatchers build nests among flotsam and marram roots and lay pebble patterned eggs. Summer visitors to Holkham are Little Terns, who can be seen offshore diving for fish. To give vulnerable birds space and a chance to raise their young, some colonies are cordoned off.

The established dunes are home to plants such as bee orchid and carline thistle. Creatures who make their home here are wasps, bees and butterflies like the grayling, small heath and common blue. In the evenings Natterjack Toads leave their burrows to join in the chorus at the spawning pools.

Strange as it may seem sand dunes are frail and trampling 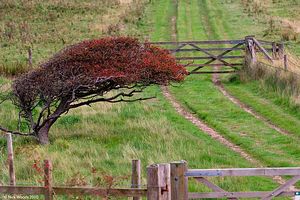 feet and wind erosion easily destroys the plants struggling to survive. Boardwalks and steps are provided for visitors to cross the beach without damage to the vegetation.

The pinewoods come as a welcome change after walking along the beach, the woodland is sheltered from the wind and the carpet of pine needles absorbs sound. You may however be startled by a flight of Crossbills tearing at the cones or a grey squirrel busy about its business.

There are three varieties of pines in the woods; Corsican Pines have grey trunks and small cones; Scots Pines have orange upper trunks and Maritime Pines, which have large cones growing in groups in the tree tops. The high canopy keeps out much of the light making it difficult for plants to grow, however a brave few are to be found, like creeping lady's tresses orchid and yellow birds nest.

On the edge of the wood are Holm Oaks, which were planted with the pine trees by the third Earl of Leicester who had them taken from Holkham Park where they had grown-up since importation in the 18th century from the Mediterranean.

On the inland side the wood is bordered by deciduous undergrowth, which provides natural nesting sites and feeding places in summer for Blackcap, Lesser Whitethroat, 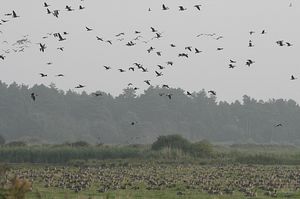 and Willow Warblers. The main Pinewoods at Holkham Gap takes you through the scrub. At any time of year it is a good place to see birds.

There is a stretch of level farmland flanked by the edge of the pinewood and the coast road, which was domesticated in the 18th and 19th centuries, used for browsing cattle and sheep.

During the Second World War some of this was ploughed to grow arable crops, with the result that the water table was lowered and the marshes dried out and was used for growing winter cereals, which did not attract wildlife.

Now however in an attempt to bring back wildlife, a scheme of dams and water control points has been set up to raise water levels and has been successful in attracting back the wildlife to this area.

The inhabitants such as Lapwing and Snipe have made an exciting recovery. Avocet, Marsh Harriers and Shovelers have returned to colonise the marshes again. So successful has this enterprise been, that recent top counts of 7,000 Brent Geese, 20,000 Pink Footed Geese and 13,000 Wigeon are over wintering at Holkham.

For an unforgettable experience, visit a hide in late evening overlooking the golden marshes in the direction of Holkham Park, to see the Geese flight out.