You are here:  Attractions -> Things to Do in Norfolk -> Blakeney National Nature Reserve 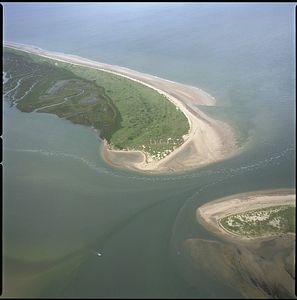 The shingle spit of Blakeney Point in Norfolk was one of the first areas ever to be managed by The National Trust, and it has been in their protective care since 1912. Blakeney National Nature Reserve covers vast areas of saltmarshes, sand dunes, mud flats and beaches, but what draws most visitors to the reserve are the colonies of seals.

This area is an important breeding ground and 'haul-out' site for common (harbour) and grey seals.

The common seals give birth to a single pup in June or July and then moult in August. Since the 1980s the grey seal population has boomed in the area. They give birth to their single white-coated pups in November and December. These seals, when 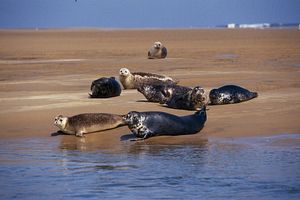 As well as being home to the seals, there are many sea-bird colonies of breeding and migrant birds. Terns, snow bunting, oystercatcher, lark, ringed plover and geese can all be spotted within Blakeney Nature Reserve.

Blakeney Point was the first nature reserve in Norfolk and was provided by Charles Rothschild, a banker and keen nature lover who gave it to The National Trust. It has since become one of the largest reserves of undeveloped coastal habitat in Europe.

The first volunteers were known as "watchers" and they patrolled the area and protected rare birds even before the area was owned by the National Trust. The work of the wardens is very similar today.

In Victorian times, the collecting of birds' eggs and the practice of taxidermy was a popular gentleman's pastime, threatening many endangered species.

Any visit to Blakeney Nature Reserve should start at the Morston Quay Information Centre, near the Lifeboat House on Blakeney Point. It has invaluable information about the wildlife and history of the area. Although the reserve covers 1,097 hectares, the main area for wildlife is the 3.5 mile long 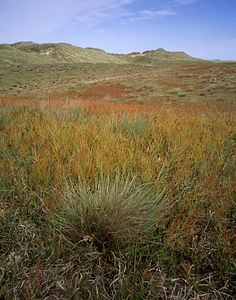 The Lifeboat House is owned by the University College London who use it as a base for field studies. It was built in 1898 to replace the original lifeboat house, but after just a few years the shingle had built up so high that it was impossible to launch a boat from it - as you will see.

Close to the Information Centre is Morston Quay itself which is the start of the coastal path which runs across the saltmarshes. Boat trips are available from here for seal-viewing and bird-watching and the National Trust tea room is open during the main visitor season.

The Stiffkey Saltmarshes are riddled with tidal creeks and are favoured by wading birds and wildfowl, especially during the winter months. It is bordered by the North Norfolk Coastal Path but visitors should check local tide tables before planning a walk as it is difficult to access at high tide.

Blakeney Quay was once a working port but it is now the domain of sailing and pleasure boats. To the east of the quay is Friary Hills, an area given over to grass and scrub which has exceptional views along the coast.