You are here:  Attractions -> Things to Do in Northumberland -> Farne Islands


A visit to the Farne Islands is like a trip to another land - one inhabited by thousands of nesting seabirds rarely seen on mainland Britain.

The 28 Farne Islands lie just off the Northumberland coast in the often stormy North Sea.

Choose a calm day between April and September and catch the hourly boat ride from Seahouses for this 30-minute boat trip, with views of seabirds and wildlife before you even leave the harbour.

The islands are uninhabited so pack a picnic and drinks, or enjoy refreshments in Seahouses. Pick up a guide book from the National Trust shop in Seahouses in preparation for 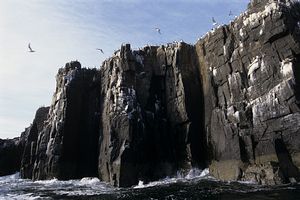 your trip or visit the Visitor Centre on Inner Farne for local information.

Things to do on the Farne Island will include the obvious, such as walking along the circular boardwalk around Inner Farne Island.

There is also the opportunity for sea kayaking from Bamburgh, or go snorkeling and diving to one of Northumberland's best dive sites with several sunken wrecks and plenty of marine life.

Everyone can enjoy wildlife watching, bird spotting and photography. Migrant bids can be seen in spring and autumn, and the breeding season for seabirds is from May through August. The 4000 grey seals produce pups in November each year.

The Farne Islands have an interesting connection with some well-known figures in history. St Cuthbert lived on Inner Farne from 676 to 687, although he spent two years as Bishop of Lindisfarne. He built a small cell which he used for praying and living in. He was the first person in England to protect birds and made special rules to safeguard the Eider ducks.

Other hermits followed from the Monastery of Durham and in 1255 they established the House of Farne, a small monastery on the island. St Cuthbert's chapel was built in 1300 and still survives today.

Another notable building is the Pele Tower, built on Inner Farne in 1500 to house a small garrison of soldiers who 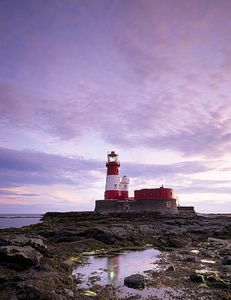 defended the coast against a french invasion.

In 1673 Charles II granted a license to erect a beacon on the islands which consisted of a fire which was lit on top of Pele Tower. In 1809 this was replaced by the lighthouse which visitors see today. Only one of the three lighthouse keepers cottages remains.

Most people know the story of William Darling and his 22 year old daughter Grace who were lighthouse keepers at Longstone Lighthouse on Outer Farne. In 1838 the SS Forfarshire had been wrecked on the rocks.

Grace and her father took out a rowing boat in the storm and saved 13 crew members. The island and Longstone lighthouse can also be visited but are managed separately by Trinity House.

Inner Farne was bought by the Venerable Archdeacon Charles Thorp in the mid 19th century and he restored the buildings, adding the stained glass windows to the chapel and installing fine 17th century woodwork from Durham Cathedral, hence it being rather out of proportion in this tiny church.

He also began the work of preserving local wildlife, a job which is continued today by the Farne Islands Association.

In 1925 the Farne Islands were purchased by a public fundraising campaign and handed over to the National Trust who continue to manage the islands for the benefit of all.

Days Out near Farne Islands

Places to Visit near Farne Islands