You are here:  Attractions -> Things to Do in Northumberland -> Head of Steam - Darlington Railway Museum

The Stockton and Darlington Railway was opened on September 27th 1825. Its prime purpose was the transport of coal from collieries around Shildon, West Auckland and Witton Park in South West Durham to the River Tees at Stockton. From there, the coal was shipped to the south of England.

The Stockton & Darlington was by no means the first railway, but its opening in 1825 marked a very significant step in the development of railways by bringing together two features for the first time: the concept of a public railway, available to all, for transport of passengers and goods, and the use of steam locomotives.

The museum collection covers the railways of North-East England, with particular emphasis on the Darlington area. Of 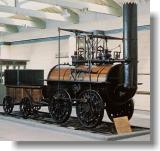 greatest significance is Stephenson's 'Locomotion' (1825), which hauled the inaugural train on the Stockton and Darlington Railway. Also from the Stockton and Darlington Railway is 'Derwent' (1845) - the earliest surviving Darlington built locomotive - and an 1846 passenger carriage. The North Eastern Railway era is represented by two main-line express locomotives, numbers. 1463 and 910, built in Darlington and Gateshead respectively. In addition, there are examples of industrial locomotives built or used in North-East England.

A range of smaller items including station and lineside signs, locomotive nameplates and number plates are displayed alongside the locomotives, as are several static scale models.

The museums collection of documentary material (photographs, plans, books and periodicals) are housed within the Ken Hoole Study Centre. This collection was bequeathed by Ken Hoole and is supplemented by material from numerous other sources, including the library collection of the North Eastern Railway Association.

Days Out near Head of Steam - Darlington Railway Museum

Places to Visit near Head of Steam - Darlington Railway Museum