You are here:  Attractions -> Things to Do in North Yorkshire -> Beningbrough Hall 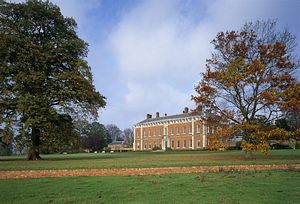 Beningbrough Hall combines a visit to an 18th century Georgian Mansion in its own impressive gardens with the unique opportunity to see over 100 paintings on loan from the National Portrait Gallery.

Beningbrough Hall has many delightful outdoor pleasures too. Surrounded by an area of flat water meadows from the River Ouse, the formal gardens include a Victorian conservatory, box-hedged rose beds and an American Garden.

The walled garden is famous for its huge lavender beds and the fruiting pear and apple trees which are all organically maintained. The waterlily pond provides a natural home for local wildlife and birds.

The stately home was built in 1716 for John Bourchier III, replacing the earlier Elizabethan manor built in 1556. 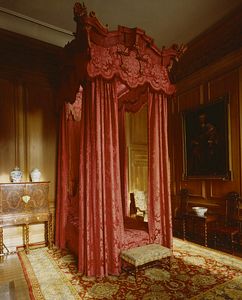 Beningbrough Hall was designed by local builder William Thornton with an unusual centre corridor which runs the length of the house. As a noted carpenter he was also responsible for the magnificent wood carving detail seen throughout the house

After a century it passed to the Dawnay family and after a degree of neglect was purchased by Lady Chesterfield, a wealthy heiress, in 1916. She spent lavishly on the property, restoring it and filling it with furniture and paintings from her family seat, Holme Lacy. Upon her death in 1957 Beningbrough Hall was given to the National Trust.

The house is approached up a splayed flight of steps to the front door over which two stone horses are magnificently displayed. The two-storey high Great Hall would have impressed visitors, as it does today and is one of the most impressive baroque interiors to be found in England.

In contrast to the grand reception rooms, there are intimate closets where guests could receive their friends in private. Glimpses of exotic décor are seen in the oriental porcelain and Chinese lacquer cabinets. The state bedroom is dominated by a magnificent William and Mary bed with sumptuous crimson curtains.

The house was built for formal 18th 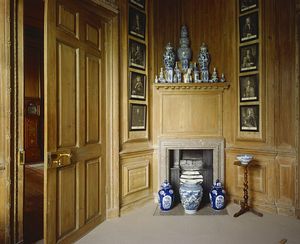 century living with state rooms for honoured guests and a long saloon for balls and social events. It is furnished in period style and makes the perfect setting for some of the chosen artworks which are on display here. Paintings by Gainsborough and Sir Joshua Reynolds are on show along with other portraits from the 17th and 18th centuries.

In contrast to the grand life of the owners, the fully equipped 19th century laundry shows the hard physical work behind the scenes which kept the show on the road.

Beningbrough Hall has 370 acres of grounds for exploring with privy gardens and beds growing flowers, fruit and vegetables as well as the 5,000 lavender plants in the walled garden. Finish your visit to Beningbrough Hall by taking a gentle stroll along the river banks.

There is a delightful restaurant on site which serves legendary roast beef with all the trimmings on Sundays. It is supplied with fresh produce straight from Beningbrough Hall's own working gardens. There is also a shop and a plant centre stocked with quality goods.

Days Out near Beningbrough Hall

Places to Visit near Beningbrough Hall