You are here:  Towns -> Places to Visit in Ayrshire -> Prestwick

Things to do in Prestwick, Ayrshire

Prestwick is situated on the southwest coast of Scotland, about 30 miles south west of Glasgow. It is close to the town of Ayr and has a population of around 15,000 at the last count.

For the first millennium of its existence, Prestwick was a Burgh of Barony and only really expanded when the railway was built in 1840. This allowed well-to-do Glaswegians to build houses further out of the city, near the coast.

The name Prestwick probably came from "preost" meaning "priest" and "wic" meaning "farm" and was the site of a farm belonging to a religious community.

In its long history many kings visited Prestwick including Robert the Bruce. He was said to have been cured of leprosy after bathing in the water from the well at the Church of St Ninian which still exists today.

The Prestwick Old Golf Course was the original home of the Open Golf Championships from 1860 to 1872.

One of the oldest buildings is the old Parish church near the railway station. Now a ruin, it dates back to the 12th century and has an ancient graveyard where Andrew Straith, the first Keeper of the Green at the Golf Club was buried.

Today, Prestwick is best known as the location of Glasgow International Airport. It played an important role in World War II and its most famous visitor was probably Elvis Presley who touched down briefly when his US Army aircraft refueled at Prestwick.

As well as accommodating many budget airlines, the Royal Navy Air Station also operates its search and rescue helicopters from the airport.

Prestwick town is divided down the middle by the railway line and the Main Street which runs parallel. On the east side is a mixture of private and council-owned housing while on the west side are private homes and small hotels.

The main landmark is the Shaw Monument which stands near the airport control tower. It was built in 1775 by the local Laird of Shaw to follow the sport of falconry from the top. This Category B listed tower has a plaque at the base showing a picture of a man with a bird of prey.

Prestwick seafront has a long promenade overlooking the bay and the Firth of Clyde. It has two children's playgrounds and an indoor activity centre.

On the outskirts of the town is Shawfarm Industrial Estate on the site of Shaw Farm which was demolished in 1960.

Things to do in Prestwick

Glasgow offers plenty of attractions thirty miles away. The Botanical Gardens and Kibble Palace are a beautiful place to visit on the west side of Glasgow. Glasgow Cathedral is also an impressive building along with Glasgow's School of Art, one of several noteworthy buildings in Glasgow by Charles Rennie Mackintosh.

Glengoyne Whisky Distillery is not far from Prestwick and offers tours of the distillery and tastings. The Master Blender tour includes creating your own blend of whisky to take home.

As well as the Prestwick Old Course, golfers can play a round at St Nicholas Golf Course which is a traditional links course, or at St Cuthbert's Golf Club. 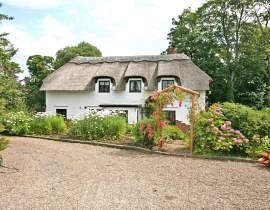 more self catering near Prestwick...

Days Out in Prestwick

Places to Visit near Prestwick