A Short Break in London - Page 2

Accommodation is another essential, core feature of any short break in London. There are a great many hotels, and it can make sense to choose one either near to where you’re planning to go, or one that's nice and central to the various activities you're planning.

That said, the nearer you get to the centre, or recognised des-res locations, the more expensive they tend to be. We'd advise that you browse the London Hotels section of AboutBritain.com and book in advance.

Eating will also most probably feature heavily in your short break in London. As you'd expect, London boasts a wide range of restaurants ranging from world class to cheap and cheerful. We'd recommend you book special meals in advance, especially during peak seasons. There are many interesting restaurants to be found in and around Covent Garden and Soho, and these tend to be popular with the theatre-goers of London's West End theatreland.

One of the most popular reasons for British people planning a short break in London is shopping, whether for Christmas or just as a special treat. While most people are aware of Oxford Street as a shopping centre, it tends to be the usual chain stores you find here, so the experience may not be that different from Anytown, UK, save for the lunacy of motorcycle couriers and taxis. 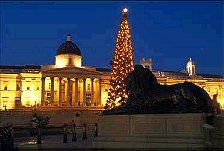 Instead, for something more special we'd recommend you make for places like Bond St, the Kings Road and Knightsbridge where you'll find the sort of high quality, specialist stores London's famed worldwide for.

London's West End theatres are rivalled worldwide only by those of New York's Broadway. A popular short break in London involves basing yourself near the West End, taking in some shopping and sightseeing in and around Covent Garden, and treating yourself to a first class West End show. While it's always handy to book your show tickets in advance, there are many outlets for tickets on the day of the performance if you’re willing to take a risk. Of course, you could always combine the historical with the theatrical and take in a show at Shakespeare's Globe Theatre on the South Bank.