You are here:  Attractions -> Things to Do in Cornwall -> Trengwainton Garden 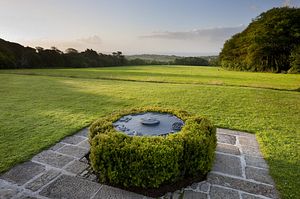 Occupying a sheltered south-facing position at the westernmost toe of Cornwall, Trengwainton Garden has views of Mounts Bay, easily identified by the rocky St Michael's Mount just offshore, which is framed by an arch of Trengwainton beech trees.

Well named, the Cornish word "Trengwainton" means "settlement of spring" and the garden does seem to enjoy a particular spring-like beauty in its exotic plantings and mild climate. The area rarely sees frost and the tall planted hedge continues to protect the half-hardy shrubs and trees as it has for the past 150 years.

There has been a house on the estate at Trengwainton for around 500 years, but work on the existing garden only really began in 1857 when Sir Rose Price, 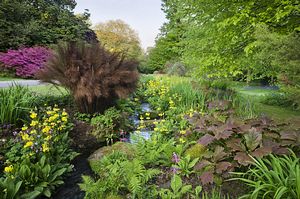 the son of a wealthy sugar plantation owner in Jamaica, planted the trees which now line the stream and protect the house from the westerly winter gales.

He used his wealth to create the unusual walled garden at the end of the driveway and chose brick, which retained its warmth better than local granite, to build a series of enclosed gardens. The separating walls would have had soil banked up on the westerly side to give the garden produce the maximum exposure to the sun's rays. Early crops of vegetables would have been produced from this rare horticultural practice.

The estate passed to the Bolitho family in 1857 and it was Lt Col. Sir Edward Bolitho who did much of the current work seen in the garden when he inherited the rambling Victorian house and estate in 1925. He also sponsored plant-collecting expeditions in 1927-8 by Frank Kingdon-Ward. He brought back seeds from the Himalayas and Burma of some of the exotic plants and sweet smelling rhododendrons which grace the garden today.

Trengwainton Garden has a collection of 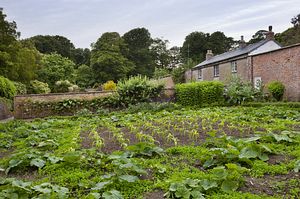 plants from round the world in its 25-acre (10 hectare) microcosm. In the spring, flowering azaleas and camellias give way to the showy pink flowers of the Magnolia Sargentiana Robusta and rare rhododendron species in vibrant colours. Lush banana plants and exotic echium spikes thrive in this well-protected garden.

Trace the route of the stream, which flows through the shrub garden and bog garden into a shady pond. The sea views and the colourful herbaceous borders can be enjoyed from the sunny terrace.

Rustling bamboos and hairy trunked Australian tree ferns are surrounded by exotic primulas and lilies. Giant ferns create a Jurassic Park environment which will ignite the imagination of young visitors as they follow the clues along the family trail.

The walled kitchen garden was interestingly built to the same dimensions as Noah's Ark and is a fine example of contemporary fruit and vegetable varieties.

Although the house is not open to the public, there is a shop on-site and a homely tea room which serves light meals and local Cornish treats such as clotted cream scones and saffron buns.

Days Out near Trengwainton Garden

Places to Visit near Trengwainton Garden