You are here:  Attractions -> Things to Do in Cornwall -> The Lizard and Kynance Cove

The Lizard and Kynance Cove 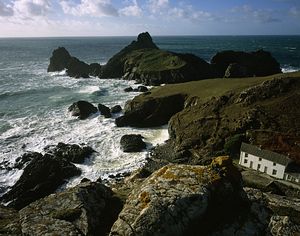 
Although most people think of Land's End as being the "end" of the British Isles, nearby Lizard Point is actually the most southerly point in Britain. This idyllic and remote area is ideal for those searching for dramatic clifftop walks, impressive geological formations, patches of wild flowers and one of the loveliest beaches in Cornwall - Kynance Cove.

The area has made history over the centuries, being the spot where Marconi's early wireless messages were sent from, now marked by the Lizard Wireless Station and the Marconi Centre at Poldhu. This headland, called the Rill, has excellent cliff walks and was where the Spanish Armada was first spotted in 1588.

Two miles north of Lizard Point is Kynance Cove, which 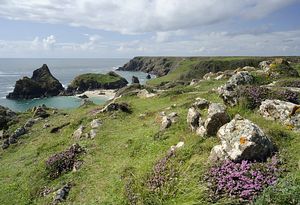 is managed by The National Trust. It is just inside Mount's Bay, with its notable rock formations and offshore islets. A new road and cliff top car parking has now made this beautiful area much more accessible, although there is still a ten minute walk down to the sandy cove.

Kynance has been popular as a beach resort since Victorian times with its clear turquoise waters and fine sand. It has some very unique rock formations including a distinctive pinnacle on the north side of the beach. The area is also known for its olive green, mineral-rich serpentine rock which is popular for making jewellery and carving into decorative vases and ornaments on a lathe.

Whether you want to swim, surf, explore Lizard Island or paint the much-loved scenery, this area has something for everyone to enjoy from March to October. The best time to visit is about three hours before low tide, to maximize the availability of the local sights.

At low tide it is possible 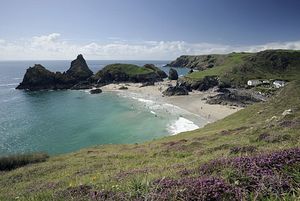 to explore the caves along Kynance Cove, known as the Parlour and the Drawing Room. The rock stacks are also accessible, called the Bishop, Gull Rock and Sugarloaf Rock. The Bellows lie to the northwest of the beach where swimming is safe at high tide. When the sea is rough, huge amounts of sand may be shifted in or out of the cove, giving it an ever-changing appearance.

On the west side of the beach the causeway or tombolo, which connects the mainland with Asparagus Island, is completely covered when the tide is in, cutting off the island for a good six hours. Asparagus Island has some very steep cliffs on the western side which drop vertically almost 200 feet into the sea, requiring those who explore it to watch the rising tide and make sure they wear sturdy non-slip footwear.

There is a beach cafe at Kynance Cove during the summer months, along with one at the Lizard Point itself and toilet facilities are also available at both points.

Days Out near The Lizard and Kynance Cove

Places to Visit near The Lizard and Kynance Cove