You are here:  Attractions -> Things to Do in Powys -> Powis Castle and Garden

It is hard to believe that the oldest parts of Powis Castle were begun around 800 years ago and some of the oaks were planted at a similar time. The castle was built by the Welsh Princes who chose to build their defences on this defensive outcrop of limestone with panoramic views across the River Severn.

Over the centuries, Powis Castle was converted from a fortress into a country house but it still has the appearance of the original Norman keep with its three towers and turreted battlements.

The beautiful stone-built building has an inner ward with a tiny courtyard and a further outer ward. The northeast tower is probably the oldest part of the castle, dating back to around 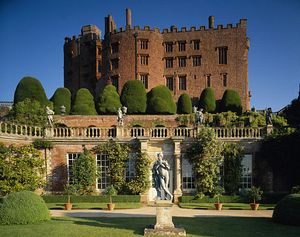 The castle passed through a number of owners before coming into the possession of Sir Edward Herbert in 1578. He undertook many repairs and modernisation including the creation of the Long Gallery which is one of the highlights when touring the castle.

The treasures within the house have been assembled by the Herbert family over the last four centuries and include magnificent collections of paintings, splendid furniture, wall hangings and sculptures. The wonderful Clive Museum specialises in the wonderful array of artifacts from India.

The stately home is well known for its Elizabethan furnished rooms. Other features are the grand staircase and the wonderful state ballroom. A fire in 1725 gutted what were probably the servants' quarters but fortunately the remainder of the solid building was unharmed.

In 1772 George Herbert, the second earl, inherited Powis Castle and he had new servants' quarters built and other rooms extensively redecorated. He died in 1801 with huge debts which were picked up by his sister, who had married the son of Clive of India.

Their son inherited not only Powis Castle, but also the Clive wealth which allowed new investment to be lavished upon Powis. 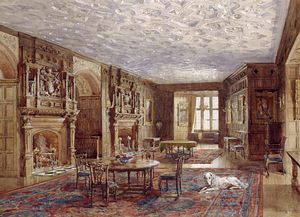 The Herbert family bequeathed Powis Castle to the National Trust in 1952, but it remained in part a private home for a further 36 years.

The 26-acre (10.5 hectare) gardens of Powis Castle are equally renowned and its sheltered position is ideal for nurturing many rare plants. The silver artemisia, named "Powis Castle", is nurtured in the greenhouses and planted out each spring.

Yew trees have been clipped into "tumps" or domes over the years as a unique decorative feature. The grand terraces look across the formal high box and yew hedges to the farmland and deer park beyond. Spring bulbs bring splendid colour to the lawns and the old brick walls are the perfect backdrop for the summer borders.

Magnificent sculptures, urns and lead statues by John van Nost add another dimension to these celebrated gardens. There is an orangery, an aviary, a Mediterranean garden, rhododendrons and many ferns to enjoy.

Having explored the magnificent house, Clive Museum and gardens, visitors can return to the inner ward and browse in the gift shop or enjoy refreshments in the homely tea room.

Days Out near Powis Castle and Garden

Places to Visit near Powis Castle and Garden