You are here:  Attractions -> Things to Do in Cheshire -> Little Moreton Hall 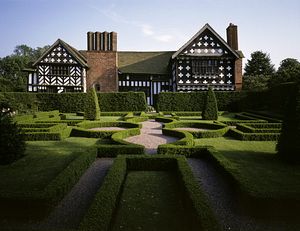 
The charming black-and-white timbered building of Little Moreton Hall certainly is one of the most famous Tudor country houses in England. First impressions are how small the building is, set amidst the peace and tranquility of the Cheshire countryside. The manor is surrounded by a cobbled courtyard and a water-filled moat.

With its irregular design and crooked appearance, it is rather odd yet strangely endearing with its structural irregularities and "Magpie" architecture. The building is covered in ornate crosses, zigzags and diamond shapes created by the oak timbers which were filled with twigs and mud, known as wattle and daub.

The well preserved moat further distorts the drunken appearance of the building in its rippling waters. Britain's most famous timber-framed 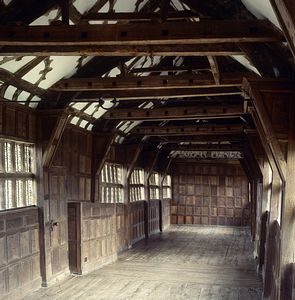 manor is certainly well photographed and looks like something from a child's nursery rhyme.

It is frequently used as the setting for historical films such as the adaptation of Daniel Defoe's novel "Moll Flanders".

Little Moreton Hall was built by the Moreton family in 1348. They probably acquired the land in the period when land was sold off cheaply after families had been wiped out by the Black Death.

The family were ardent loyalists and fervent tax collectors. By the time of Elizabeth I they owned vast acres of land.

The original parts of the existing house were built in the mid 1400s for Sir Richard de Moreton. The kitchens (we use the term "kitchen" loosely), were added by William Moreton in 1480. His successor, William Moreton the Second, added the drawing room and the chapel.

The windows with their five angled bays are a lovely feature flanking the doorway and the maker, Richard Dale, was clearly proud of his workmanship as he added his name, trade and year to the owner's details along the frieze. It reads:

"This windous whire made by William Moreton in the yeare of Oure Lorde MDLIX (1559) Richard Dale Carpeder made thies windous by the grac of God".

In typical Tudor style, the upper stories extend beyond the ground floor, similar to the Shambles in York and the Rows in nearby Chester.

onto the property through good and bad times and eventually it passed to the last surviving member of the Moreton family name, Elizabeth, who was a nun. With no chance of an heir, she left the house to Bishop Charles Thomas Abraham who continued Elizabeth's restoration work. The building was bequeathed to the National Trust in 1938.

Despite its precarious crooked appearance the house is sound and guided tours can be taken around the higgledy-piggledy interior. Each room leads into the next and the staircases are tight spirals. The long gallery and the wall paintings which date back to Tudor times are quite extraordinary. The staggered bathrooms are even more edifying!

This fine Tudor manor house is largely unfurnished to allow visitors to appreciate the plasterwork, frescoes and the irregular Tudor glass in the windows. There is a heavily decorated fireplace in the Upper Porch Room, said to be the only truly vertical part of the house!

Outside the house there is a small knot garden, typical of Elizabethan times. There is also a herb garden, a yew tunnel and some colorful herbaceous borders.

Little Moreton Hall is said to be haunted by a grey lady who drifts past visitors in the Long Gallery, and the sobs of a child have been heard in the chapel, so you may get more of a brush with history than you bargained for!

Days Out near Little Moreton Hall