You are here:  Attractions -> Things to Do in Hampshire -> Eastleigh Lakeside Steam Railway 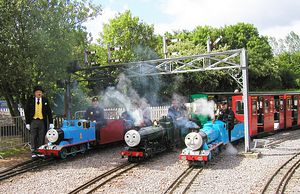 Eastleigh Lakeside Railway started running in the summer of 1992 on a short and temporary track at Lakeside Country Park. The park is owned by Eastleigh Borough Council and the lakes were created from gravel workings when the M27 was built nearby.

In 1993 the Council awarded ELR a 3 year lease which allowed a more permanent track to be laid providing a return journey of just under 1¼ miles. The track was laid on sleepers to accommodate 7¼ inch and 10¼ inch gauge trains as it was anticipated that a permanent station could be built in due course.

After several years of negotiation with the council a long lease was obtained in 1998 with permission to construct a permanent station building and a halt was built at Monks Brook to allow a break of journey on the other side of the park.

The new station building opened in February 1999 and the conversion to dual track together with the new return track thus enabling continuous running was opened on 26th. August 2000.

All coaches are now 10¼ inch thus giving a much smoother ride. The 230 foot tunnel was built in the summer of 2003.

Eastleigh Lakeside Railway is funded from private sources and staffed by enthusiasts and volunteers.Lakeside Café is open when the Railway is running 10.00 to 4.00 for Breakfast Lunch and afternoon Tea, also Takeaway.General Information:Souvenirs, refreshments and ice cream sales in the Booking Hall Toilets including facilities for the disabled Ample free parking 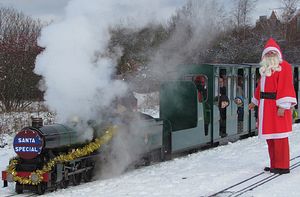