You are here:  Attractions -> Things to Do in Devon -> Castle Drogo 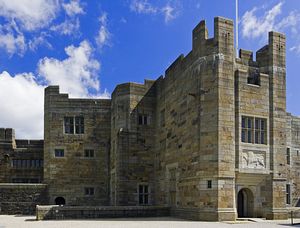 Combine a drive through beautiful Dartmoor National Park with a visit to the wonderful stately home of Castle Drogo.

Visitors to Castle Drogo in Drewsteignton may be surprised to learn that the country house was the last castle to be built in England and was only completed in 1930. It was also the first 20th century property to be donated to the National Trust.

This grand Grade I listed building was designed by renowned architect Edwin Lutyens for Julius Drewe. A wealthy millionaire businessman, Julius often stayed with his cousin, the rector of Drewsteignton, and eventually bought 450 acres on which to build his dream home. The location is superb with views across Dartmoor National Park 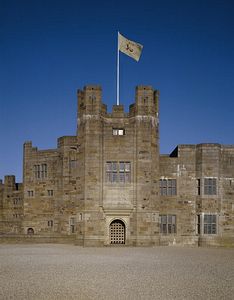 and the Teign Valley.

The foundation stone for the house was laid in 1911, but progress was slow due to the outbreak of the First World War and the economic downturn. The castle, built entirely of granite, is approached through a gateway tower with twin octagonal towers and a modern-day portcullis beneath the heraldic Drewe lion.

Those who appreciate architecture will note that the castle has "borrowed" a number of styles from the medieval and Tudor period along with more modern minimalist features. It was also built with the latest technology. Two turbines were driven by the local River Teign to supply power to this 20th century home.

Castle Drogo's interior is in a comfortable style with exotic Spanish furniture in some of the rooms. There are some interesting family exhibits and pictures alongside the 17th century tapestries.

The Arts and Crafts gardens were probably designed by George Dillistone but Gertrude Jekyll certainly had a hand in the plantings. Rhododendrons, magnolias, roses, flowering shrubs and herbaceous borders can all be enjoyed throughout the year.

Plants of particular note are the Parrotia Persica 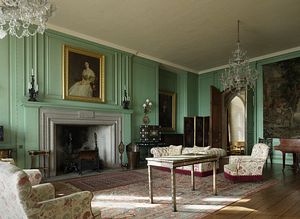 or Ironwood trees, the fern garden and the stunning original wisteria which covers the wall with flowers in late spring. For amusement there is a circular croquet lawn on the former tennis court.

Castle Drogo was finally completed in 1930 and unfortunately Julius Drewe died a year later. His wife Mary and son Basil continued to enjoy the castle although it was put to a different use during World War 2 when Mary ran an orphanage for homeless babies whose parents had been victims of the London Blitz.

Upon her death in 1954, her son Basil, grandson Anthony and his wife took over the running of the estate until 1974 when most of the estate was donated to the National Trust.

The latest addition to Castle Drogo is the new visitor centre and café which were opened to visitors in 2009. The shop stocks local products, gifts and plants which reflect those seen in the delightful gardens. One new introduction which is popular with the locals is the Drogo breakfast, so come early and start the day with hearty Devon fare.

Days Out near Castle Drogo

Places to Visit near Castle Drogo