You are here:  Attractions -> Things to Do in Kent -> Canterbury Roman Museum 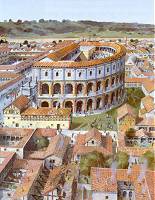 An Archaeological Quest For The Buried Roman Town

Canterbury's acclaimed Roman Museum has been specially constructed underground in the excavated Roman levels below the Longmarket Shopping Centre.

Explore the intriguingly designed settings and follow the detective work of archaeologists - through to the excavated Roman house site - and to the hands-on area where you can touch the past.

Follow the archaologists' quest for the buried town of Durovernum Cantiacorum - which flourished for almost 400 years where Canterbury stands today.

Days Out near Canterbury Roman Museum