You are here:  Attractions -> Things to Do in Northumberland -> Belsay Hall 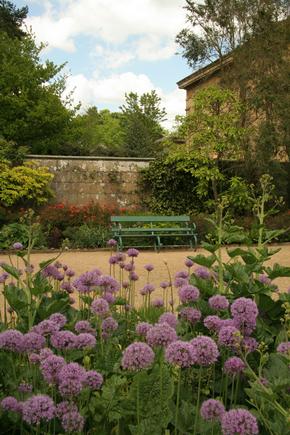 The Gardens
With its 19th century hall, Grade I listed gardens and 14th century castle, Belsay Hall is one of the best-value days out in Northumberland.

The lovely mansion, formerly known as Belsay New Castle, was built in 1817 for Sir Charles Monck.

His family, the Middletons, had built the earlier castle situated nearby.

Sir Charles had visited Greece on his honeymoon and been particularly inspired by the Temple of Theseus in Athens.

With the assistance of architect John Dobson, he designed his new home in classical Greek Revival style, standing on a raised podium with giant columns at the entrance.

The house was built of Ashlar local stone with a Lakeland slate roof.

The two-story mansion has seven bays with pilasters and is topped with a bold decorative cornice.

Visitors can begin their tour by stepping into the impressive Pillar Hall. It is two stories high with elegant pillars and features classical Greek motifs beneath the glass cupola. Leading to the second floor is a grand staircase with elaborate brass balusters and the original brass lamp holders.

The house has a library with a coffered ceiling and a fireplace made from beautiful yellow scagliola, a type of imitation marble. The dining room has a similarly lovely ceiling and a marble fireplace with Doric columns. The kitchen and staff quarters are in an extended wing on the north side of the house.

Belsay Hall is completely unfurnished and unadorned deliberately, so that visitors can better appreciate the superb architectural detail of this magnificent early 19th century mansion. The large vaulted cellars are also worth seeing.

Surrounding the hall are the magnificent 30-acre landscaped gardens which were established by Sir Charles Monck once the house was completed. The Quarry Garden was the source of the honey-coloured stone used for building the hall and surrounding buildings. It is now a naturalised setting for a fern garden with ravines, pinnacles and exotic plants.

Cragwood Walk is a pleasant place to stroll and examine the rare plantings and unusual species of shrubs. In late spring the rhododendron garden is a real picture of colour.

Sir Charles' grandson, Arthur, was a pioneer in horticultural planting and added the lovely Winter Garden, Yew Garden and Magnolia Terrace. Closer to the house are more formal terraced gardens of roses, lilies and lavender.

After exhausting the main hall and gardens, move on to the medieval castle. The earliest part of these buildings was the Pele Tower around which the 14th century fortification was built. This was intended as a refuge during the times of Anglo-Scottish warfare, but was also intended to impress.

The castle still has traces of the elaborate wall paintings which have sadly not survived over 700 years. There are stunning views from the top of the tower.

The Pele Tower building was extended in 1614 with a wing which formed the more comfortable Jacobean-style house. The family lived there until Christmas Day 1817 when they moved into the newly completed Belsay Hall.

The Middleton family continued to live at Belsay Hall until 1962 when the building was handed over to English Heritage and opened to the public.

Days Out near Belsay Hall

Places to Visit near Belsay Hall