You are here:  Attractions -> Things to Do in Cheshire -> Beeston Castle 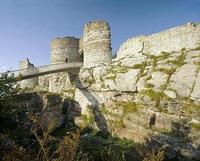 From its commanding position on a sandstone escarpment 500 feet above the Cheshire Plain, on a clear day, visitors to Beeston Castle can enjoy superb views as far as the Welsh Mountains and the Pennines.

Castle of the Rock

Well-named the "Castle of the Rock", Beeston Castle dates back to the 1200s. However the site has evidence of much earlier occupation with traces of Bronze Age and Iron Age settlements stretching back over 4,000 years.

Beeston Castle is a great day out for anyone visiting the Chester area. It has an impressive gatehouse at the foot of the hill, an inner bailey and a fighting platform, but it never had any accommodation, kitchens or domestic quarters.

Beeston Castle was only ever intended to be a rallying point for troops and supplies. However it has one of the deepest wells in England.

Beeston Castle was started in 1226 by Ranulf, 6th Earl of Chester, and was clearly inspired by the crusader castles of the Holy Land. Ranulf used all the latest ideas when he built his fortress such as D-shaped towers to give wider scope for the archers. He intensified the naturally steep hill with deep trenches around the inner bailey.

Unfortunately both he and his son, John, died before the castle was completed. In 1238 the castle was claimed by Henry III as a royal stronghold and he used it to wage war on the Welsh. Wooden structures and tents would have filled the outer bailey.

By the 14th century Beeston Castle was up for sale, and it was bought by a local knight - Sir Hugh Beeston, who gave it his family name.

By the 16th century the Castle was in a bad state of disrepair and was sold to a local landowner. However, the outbreak of Civil War suddenly made it invaluable and it was hastily repaired. It became a Royalist stronghold and held out against a 12-month Parliamentarian siege. Starvation finally made the Royalist troops surrender in 1645.

The castle land once again was used for grazing and by the mid 19th century the castle was regarded as a romantic historic monument. The 1st Lord Tollemarche became the new owner in 1846. He rebuilt the gatehouse and opened the castle as a local attraction, complete with kangaroos in the grounds! He also built himself a grand neo-Gothic residence across the valley called Peckforton Castle.

A visit to Beeston Castle, now in the care of English Heritage is a fascinating insight into local history. The onsite museum in the gatehouse outlines the castle's long and strategic history. It has interesting models and artifacts such as flint arrowheads, axe heads, funeral urns and lead shot all found on the castle site.

The surrounding area is ideal for hilly walks along the sunken paths created by the wheels of countless wagons. Climbing the hill and crossing the narrow bridge into the inner bailey it is easy to believe the local legends of buried treasure.

It is said that Richard II buried his gold at Beeston in 1399 before boarding a ship to Ireland. He never returned. Treasure hunters have scoured the inner bailey and the deep well without success. Three underground tunnels have been tested with the latest technology, but some say there is a fourth passage off the well where the lost treasure must surely lie.

Days Out near Beeston Castle

Places to Visit near Beeston Castle