You are here:  Towns -> Places to Visit in Gloucestershire -> Newent

Newent is the smallest of the four towns in the Forest of Dean District and lies in the North West corner of the county of Gloucestershire, known for many years as the capital of the 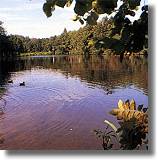 The name appears in the Doomsday Book as 'Noent'. Sandwiched between the Malvern Hills and tree covered slopes of the Forest of Dean, it is known for its 17th century half-timbered Market House and

St. Mary's Church which dates back to Norman times. Listed buildings can also be found in the main street.

At Newent you will find the National Birds of Prey Centre, the Shambles Museum, and St. Anne's Vineyard.

Days Out in Newent

Places to Visit near Newent