You are here:  Towns -> Places to Visit in North Yorkshire -> Knaresborough

Things to do in Knaresborough, North Yorkshire 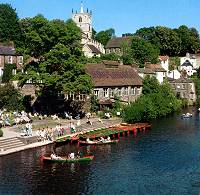 The exact origins of the market town of Knaresborough are shrouded in mystery, but could well extend back to the Norman Conquest and possibly even to Roman times. The River Nidd sweeps the outskirts,providing boating facilities and relaxing riverside walks.

Famous for its breathtaking views of the Nidd Gorge, the town is made up of numerous ancient walkways, cobbled alleys and secret passages, all of which reward careful exploration.

A collection of colourful characters associated with Knaresborough, such as Blind Hack and Mother Shipton, lend certain individuality to the town. Mother Shipton's cave, believed to be England's Oldest attraction, is the birthplace of the renowned 15th century prophetess.

Visit the Wishing well and the famous Petrifying well where absorbent objects are turned to stone with the passage of time. Knaresborough is also home to a rare medieval

hermitage, that of St. Robert's cave is cut into the cliff face beside the Nidd and can still be visited today.

As well as the oldest attraction, Knaresborough also lays claim to the Oldest chemist shop! This has stood in Knaresborough's picturesque Market Place since 1720. Its unusual façade and antiquated interior which still harbour original fixtures and fittings, have made it an attraction of exceptional value to local people, historians and visitors.

For many years the royal Castle of Knaresborough played an integral part in British history. It is now in the possession of the Crown as part of the Duchy of Lancaster. Situated atop a large cliff, the ruined Castle commands a view of the River Nidd and Forest of Knaresborough. Visitors can inspect the atmospheric two storey keep where it is believed Richard

II was once imprisoned. The dungeon and sallyport (the secret underground access tunnel), are also open to view.

The Courthouse dates from the fourteenth century and is now home to a small museum featuring furniture from the original Tudor court. Knaresborough's development as a medieval town is traced here, while an exhibition on the civil war provides an insight into the effects of that conflict on the town. Other features of the town include the chapel of our lady of the Crag, the Parish church of St. John the Baptist and the grounds of Conyngham Hall which provide tennis, putting and other delights.

Henshaw's Arts and crafts centre at bond End is a wonderful new attraction for Knaresborough. The centre provides a base for visually impaired graduates of Henshaw's college to work in the numerous commercial craft shops there.

These are housed within an innovative, attractive building with plenty of architectural quirks, designed to appeal to all of the senses.

Every summer, the Knaresborough Festival celebrates a wealth of musical diversity including folk, blues and country, as well as staging exhibitions of art and photography. The annual Bed race takes place each June, with a riotous jumble of decorated "beds" parading through the streets, negotiating cobbled lanes and hairpin bends before making their way to the notorious river-crossing and the finishing line.

Knaresborough's indoor swimming pool has superb facilities, whilst for the more artistically inclined the town's range of small, exclusive galleries have gained a stowing reputation. Knaresborough is interspersed with olde worlde tea rooms, restaurants and traditional pubs, offering regional home-cooked dishes. It's easy to see why this market town captures the hearts of those who visit! 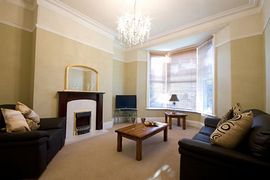 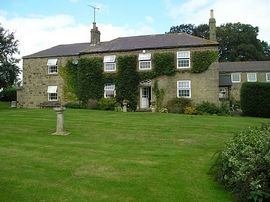 more self catering near Knaresborough...

Days Out in Knaresborough

Places to Visit near Knaresborough