You are here:  Towns -> Places to Visit in Oxfordshire -> Clifton Hampden

Things to do in Clifton Hampden, Oxfordshire

There's something wonderfully English about Clifton Hampden. On a blustery day, the swifts snapping up the mayfly, cow parsley almost at shoulder height, a walk or bike ride along the Thames Path National Trail is a lovely way of approaching the Oxfordshire village. 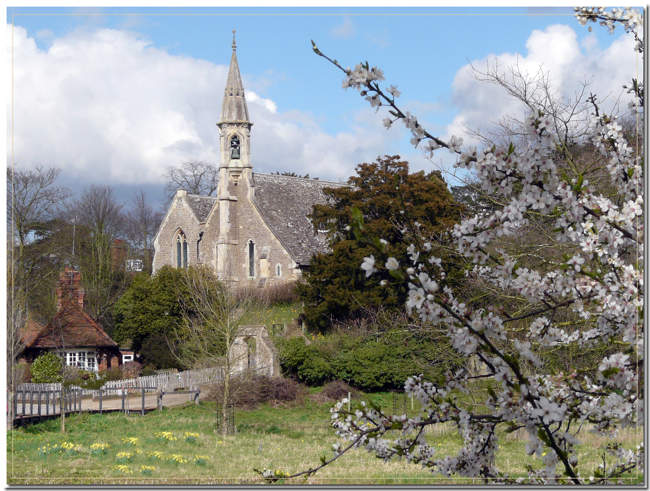 Jerome K Jerome's description in his novel "Three Men In A Boat" instantly leaps to mind.

Looking at the number of tidy thatched and red brick cottages adorned with scented honeysuckle, wallflowers and wisteria you have to agree with his view of "the wonderfully pretty village, old fashioned, peaceful and dainty with flowers."

Clifton Hampden, which in Anglo Saxon times was known as "tun on a cliff", exudes a sense of history.

Perhaps on just such a day, Cromwell himself passed this way en route to Abingdon, the village having become a convenient spot for crossing the river during the English Civil War.

Church of St Michael and All Angels

No doubt he would have acknowledged the church of Saint Michael and All Angels perched on the little cliff here though he would not have seen it in the style that exists now.

The charming church stands perched above the village and is approached by a set of steps. It's an atmospheric place of worship with the wind blowing around the rocky slope.

However, its exposure to the elements no doubt contributed to the apparently 'ruinous' state it was in during the 18th century and thus stirred a local benefactor, Sir George Gilbert Scott, to rebuild it in 1843-44. Some ancient parts remain though.

The stone heads of King Stephen and Queen Matilda adorn the inside of the front porch. Facing the Thames below are believed to be the heads of Saint Birinus and King Cynegils.

The interior is a mix of styles and features to look for include a beautiful mosaic of the Last Supper produced by Clayton and Bell which stands over the altar and a stone fresco of a boar chase located in the older part of the church.

The churchyard is dominated by a statuesque Cedar of Lebanon which has been grown from a seed brought back from the Lebanon by Reverend John Lomax Gibbs, Vicar of the Parish and planted 'in this spot in AD 1866'.

Unluckily, I could not find the grave of William Dyke who rests here and who is alleged to have fired the first shot at the Battle of Waterloo in 1815!

From the churchyard, you get a fantastic view of Clifton Hampden bridge designed in Gothic style by the same Sir George Gilbert Scott. 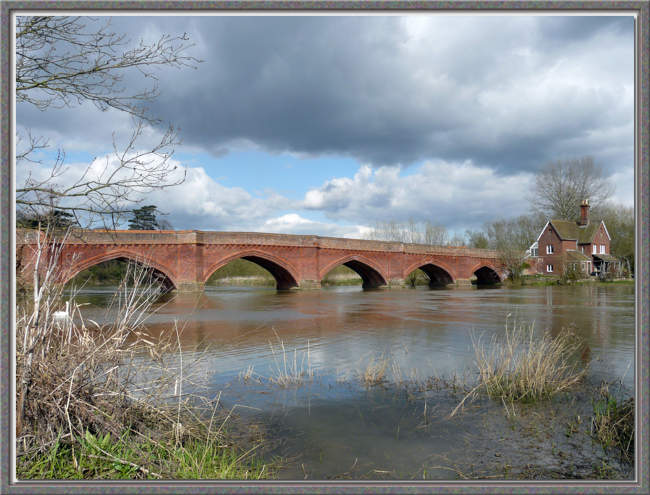 In days long gone, a ferry operated across the river before being replaced by the toll bridge which remained as such until 1946.

Now it is the main thoroughfare for a great deal of noisy traffic, perhaps one of the reasons why the bridge has been deserted by large numbers of house martins who once used to nest in hundreds under the bridge.

However, the spot close by is a popular one for caravanners and campers. Many boaters appear to delight in following in the footsteps of three men in a boat, and it's often very busy in summer.

Boats can moor here, and Clifton Hampden Post Office is located nearby for some supplies. A little further down the river, Clifton Lock was introduced in order to aid navigation past a tricky area of the water.

In 1941 the Fleet Air Arm opened the Royal Naval Air Station HMS Hornbill, which is now the Culham Science Centre after the Admiralty closed the airfield in 1956. It's located along the old toll road between Abingdon and Dorchester.

Many Americans came over here during the Second World War and some of their memories are framed in pictures on the wall at the nearby "Barley Mow".

In the early 18th century the village had three pubs but now there is really only this beautiful thatched inn remaining.

This 14th-century inn has seen many changes but still offers a wonderful visit to an English country pub with good food and real ales.

Again, it was Jerome K Jerome who said: "if you stay the night on land at Clifton you cannot do better than put up at the Barley Mow."

Days Out in Clifton Hampden

Places to Visit near Clifton Hampden